As Twitchy reported, President Obama and Mitt Romney met today at the White House for a lunch summit. While the media were sadly kept away from the summit and forced to dream up lunch conversations, we were fortunate enough to eventually get a peek at Obama and Romney making nice in the Oval office.

The White House barred reporters from the event, but released an official photo showing Obama giving Romney a tour of the Oval Office. 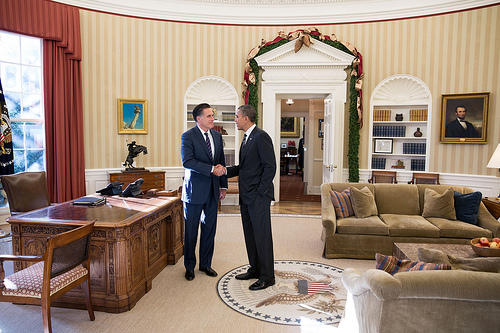 The men reportedly promised to keep in touch. Just like buddies!

Obama and Romney do their best impressions of two people who may kind of like each other. Photo of the day @theweek http://t.co/BQMQHiIW

Is this from Earth 2 where Romney won? MT @charliespiering: WH photo of Obama and Romney shaking hands in Oval office pic.twitter.com/XcZDnwfc

The Twitter consensus seemed to be that the photo could best be described as incredibly awkward:

KNEEL BEFORE ZOD!!! RT "@mollyesque: This is an impressively awkward photo of Obama and Romney. pic.twitter.com/BAGRE1EI"

*awkward* RT @pfeiffer44 Here is the @petesouza photo of President Obama and Governor Romney in the Oval Office today http://t.co/7QdPIEzS

@Bashirlive Mitt Romney looked awfully awkward in that photo of him and President Obama at the Whitehouse. I beg that was stuff for Romney

Gah, this photo is awkward. http://t.co/hWHtkzI0

A body language expert apparently agrees with that assessment:

Maybe so. But the body language isn’t the only thing about that picture that didn’t sit well with people. Some notice that there was something else about the photo that seemed … off:

As @mtredden noticed, the best part of this Obama/Romney photo is the guy creeping in the background. http://t.co/46Qhxk59

The Romney/Obama photo. Is anyone going to tell me who the dude lurking in the background is?

Just who was that mysterious doorway lurker?

He's cool. Just their NWO handler. MT @michaelhayes: Romney/Obama photo. Is anyone going to tell me who dude lurking in the background is?

Perhaps Photoshop can shed some light on the mystery:

Or maybe it’s this guy:

Definitely could be him. Even though the president is all set to jet off to Hawaii for a three-week vacation, the fiscal cliff is always lurking.