Unbelievable. While Americans struggle to piece together the events of yesterday which led to the violent deaths of America’s ambassador to Libya and three others at the U.S. Consulate in Benghazi, WikiLeaks is pointing the finger of blame at the United States and the United Kingdom — for “normalizing” the storming of embassies.

By the UK threatening to breach the Ecuadorian embassy in London it helped to normalize attacks on embassies, in general. It must retract.

WikiLeaks founder Julian Assange, who has been fighting extradition to Sweden to face allegations of rape and molestation, has been holed up in Ecuador’s embassy in London since June. He poked his head out the window last month to deliver a brief statement as police held back protesters, an act which WikiLeaks apparently considers “a threat to storm” the embassy.

The @wikileaks tweet makes a valid point: US cannot be silent on threats that suit agenda, then outraged when others carry out such threats.

@jaraparilla @wikileaks Are you insane? Did Britain attack the Ecuadorian embassy with bombs and murder the ambassador? #getagrip

@jaraparilla @wikileaks @BiellaColeman I think the fact that deaths are involved here makes some distinction legitimate.

@shilivan @jaraparilla @wikileaks "Storm" was never on the table. What they "threatened" was a legal process to change embassy status.

WikiLeaks backtracked every so slightly, deleting a tweet with the word “tacit” — a word too rare to be understood.

We have deleted and rephrased a previous tweet with the word 'tacit' in it, since the word is rare and was being misinterpreted.

If you don’t believe Wikileaks have firmly disappeared up their own arse yet, have a read of this monumental fuck up. https://t.co/Av51VZz4 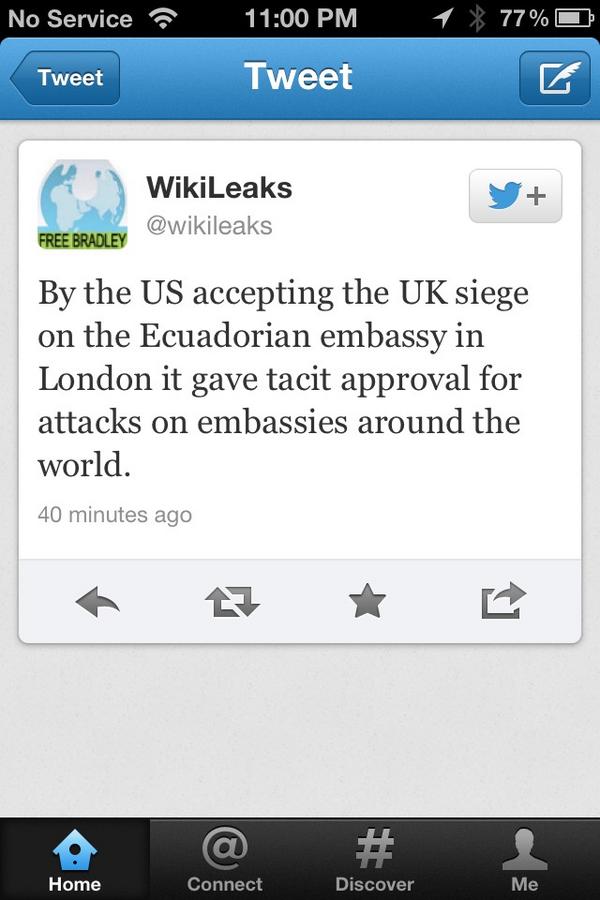