Twitter explains why Colin Kaepernick, ‘one of the greatest quarterbacks of our generation,’…

Sen. Rand Paul objects to ‘this unconstitutional sham of an ‘impeachment’ trial’…

How refreshing™: White House will call on reporters for President Biden for some reason

Wow: Newsweek goes back and stealth-edits piece on female Rangers to line up with Salon’s smear of…

Dr. Anthony Fauci announces that wearing two masks might be better than just one

‘Justice is clearly the goal’! Trump’s Senate trial will be presided over by a Dem…

Dana Loesch learns she’s not eligible to join Twitter’s Birdwatch program, and the reason is…

‘The new leading from behind’: Does Jen Psaki’s 2-word description of Biden’s…

Like clockwork, after a monster killed 17 innocent people at Douglas High School in Parkland, FL., Lefties were out in full force not blaming the actual gunman but … you guessed it … the NRA. Forget that none of these mass shooters have been members of the NRA, for whatever reason the National Rifle Association has become the bogeyman for gun control advocates.

For example, Alyssa Milano tweeted this: 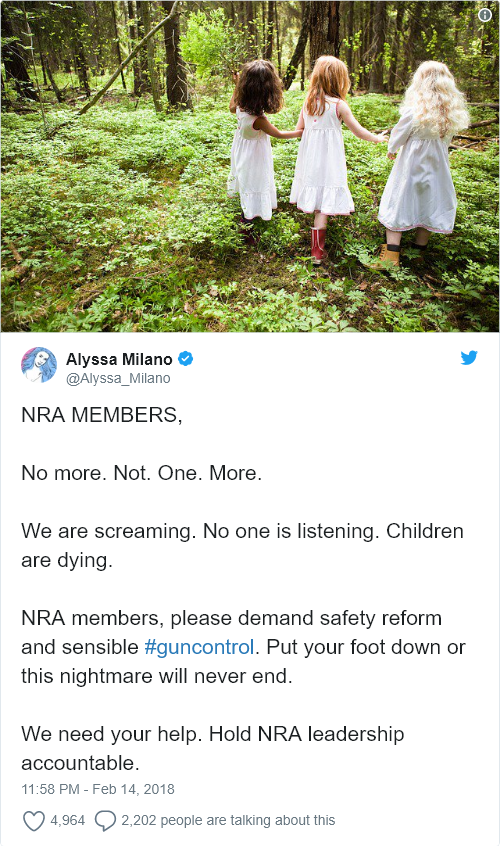 How is the NRA leadership responsible for this or any mass shooting?

Herein lies the biggest issue in the gun control debate; every time there is a tragedy, gun control harpies start accusing the NRA and immediately call for ‘sensible gun control,’ which usually includes the banning of ALL GUNS. This, of course, makes law-abiding gun owners very defensive and so everyone screams at one another for a week or so and nothing gets done to actually address the problem.

It’s not the gun.

And it’s definitely NOT the NRA.

When do we start talking about WHY these people are taking so many innocent lives instead of HOW they’re doing it? 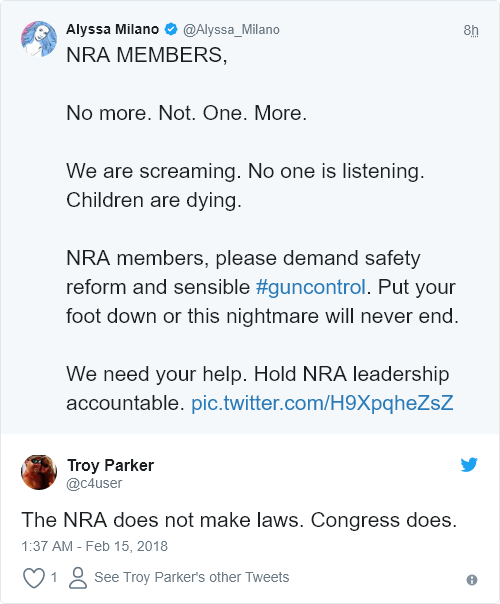 They act like the NRA has authority at the government level when in reality they receive zero dollars from the government and are in no way actually affiliated with it.

We’ve seen many, many people offering to absolutely support any law that would have stopped this tragedy from happening; we’re not entirely sure though that gun control fanatics understand what sensible gun control looks like.

The only way this discussion actually happens is if the Left stops saying stupid things like ‘Republicans have blood on their hands’ (looking at you, Chelsea Handler), and if they start actually holding the gunman accountable, not the NRA.

Until then, unfortunately, it’s more about the ‘fight’ than the actual issue.

REPORT: YouTuber alerted the FBI about Nikolas Cruz in September 2017

Sen. Rand Paul objects to ‘this unconstitutional sham of an ‘impeachment’ trial’ of a private citizen; Sen. Tom Cotton too

How refreshing™: White House will call on reporters for President Biden for some reason

Wow: Newsweek goes back and stealth-edits piece on female Rangers to line up with Salon’s smear of Tom Cotton

Twitter explains why Colin Kaepernick, ‘one of the greatest quarterbacks of our generation,’ is trending