U.S. State Dept. website gives a second reason to avoid traveling to Ukraine (in case the threat of a…

Field of Screams: NYT shares the touching story of Boston moms who bonded briefly but loudly over the…

Fox News’ Jennifer Griffin’s report on what was said during a State Dept. call about Ukraine…

Amen! Twitter users are givers, and they are continuing to give the gift of laughter. As Twitchy reported, Piers Morgan had a super sad face over the petition to deport him. Today, he pitifully wallowed in the attention.

We are laughing at you, not with you Piers! Now, happy warriors are offering up some hilarious suggestions for deportation gifts for Musket Morgan using the hashtag #PiersMorganDeportationGifts.

He needs that one; Amendment thingies are hard!

#PiersMorganDeportationGifts
A fan site on twitter with fewer followers than viewers of his show pic.twitter.com/2TgksEWE 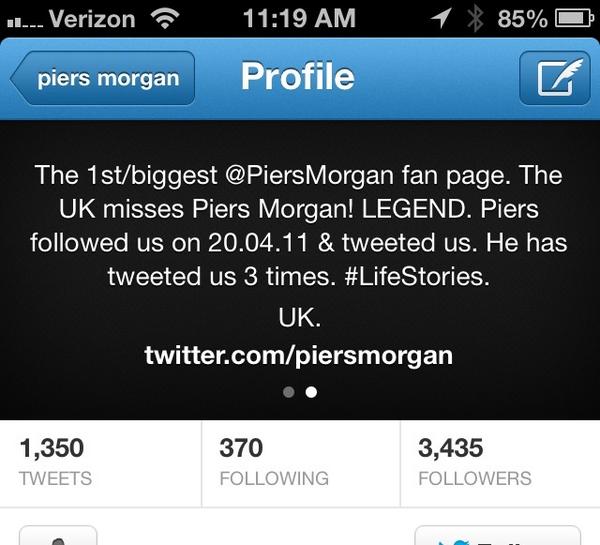 #PiersMorganDeportationGifts – The Barack Obama commemorative Teleprompter… because like Obama, he doesn't do well speaking on his own…

#PiersMorganDeportationGifts
A copy of the Constitution …he'll have more time to actually read it& maybe even find someone to explain it.

#PiersMorganDeportationGifts A thesaurus. His name-calling "journalism" could use a little creativity.

#PiersMorganDeportationGifts An autographed and empty book of all the laws Obama has implemented on gun control.

#PiersMorganDeportationGifts A lifetime membership in the #NRA. #tcot

Heh. Some have already started giving that gift. Piers Morgan and his fellow travelers have inspired new NRA memberships.

You’re welcome, Musket Morgan. Keep them coming, Twitter. In the spirit of giving and all.

U.S. State Dept. website gives a second reason to avoid traveling to Ukraine (in case the threat of a Russian invasion isn’t enough)

Field of Screams: NYT shares the touching story of Boston moms who bonded briefly but loudly over the ‘pain and rage’ of having to raise their kids