As Twitchy reported, hot dog vendor Clint Tarver’s business was destroyed by union goons, hurling vicious racial epithets, in Michigan. “There will be blood,” you see. Most of the media swept the union-perpetrated violence under the rug. Predictable.

But Twitter users are wondering, “where are the alleged civil rights leaders?” Or the president?

@davidwebbshow @BarackObama Where is Al Sharpton?

I'm sure Reverend® Jesse Jackson is going to go to Lansing and march for Clint Tarver any second now. http://t.co/5BzZ8rAN

I'm sure @TheRevAl is going to go to Lansing to march for Clint Tarver any minute now. http://t.co/5BzZ8rAN

@straus40 waiting for @revjjackson to get fired up and defend this man attacked my mob hurling racial slurs! …waiting…

@MamaJukes They are not for equal rights, they are mouthpieces for the liberals. Nothing more than racists for hire. @revjjackson @thereval

I expect @TheRevAl to rush to Clint Tarver's aid and decry the racial attack by union yhugs any moment now. *crickets*

@TheRevAl why arent u UP in arms as WHITE union ppl DESTROY a BLACK mans hot dog cart in Mi yesterday Not a word from u RACIST!!

But as the #unions own both of your behinds, I’m not holding my breath. Not good Race Bait, Inc. material. @TheRevAl @RevJJackson #tcot

And where are they?

On a early flight to Atlanta. I have meetings at NAN Atlanta and will do my shows from here today.

His shows, of course. Jackson, meanwhile, is busy canoodling and posting star-squee photos.

Vincent Pastore from, 'The Sopranos shares a word w/ Me before taking a call during #121212Concert. Raising millions. pic.twitter.com/B6mDtl1Z 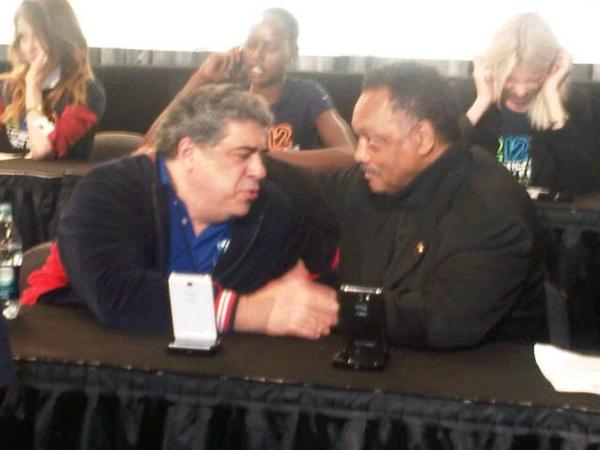 Union thugs destroying a black man’s business doesn’t suit their false narratives and political agenda. It’s totally okay to be racist thugs, if you have that sweet, sweet union money.

Vice President Kamala Harris runs down the list of the ‘most vulnerable,’ and it includes just about everyone