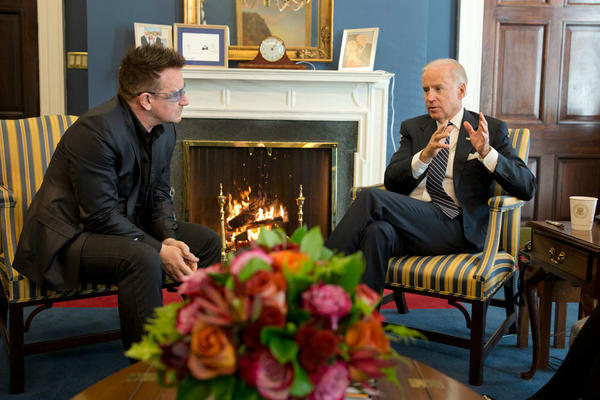 Well, that was fast!

VP met with #Bono today to discuss global development, AIDS and fighting poverty. Check back soon for a picture!

U2's Bono surprised the press at the WH Tues, dropping by to talk abt international development issues w/@VP.

It’s weird, though, because we thought none of that pesky stuff existed anymore! Didn’t the seas recede and all poverty go “poof?” Well, except for the poverty here, along with the dire fiscal situation. But, shhh. That’s a secret and not to be discussed. Fiscal cliff, shmiscal cliff. Biden has rock stars with which to canoodle!

Further, if he wants to discuss actually helping people globally, he should talk to President George W. Bush. At least he knows not to bother with President Obama; he totally won’t find what he’s looking for there.

VP & U2; He didn't meet with the President but it seems Bono did meet with Joe Biden http://t.co/wOP8Dtky (@Majchrowitz)

And how about that photo?

Ask, and ye shall receive. It’s irresistible, isn’t it? Twitter users caption, and all out mock, the pair.

"This is why Zooropa literally sucked." RT @VP Biden meeting with Bono in his West Wing Office today. pic.twitter.com/0DV5Cwuq

@markknoller The most exciting thing in that photo is the set of chairs.

Where the streets have no brains. RT @postpolitics @postpolitics: Biden and Bono meet at White House http://t.co/jmJ2ILy7