Shooting on campus @USC, suspect is still at large stay inside and lock your doors!!

The Los Angeles Police Department was responded to reports of a shooting on the campus of USC late Wednesday night.

LAPD sources said the incident occurred outside a Halloween party and that at least one person was injured. It’s unclear if either the victim or the gunman were students at USC.

The condition of the victim was not immediately known.

The daughter of “Shield” star Michael Chiklis is OK:

Does anyone have any information about the #USC shooting tonight?!!!

.@BrandonRowe14 Yes, we just heard from her. She's fine. She was on campus when the shooting occurred but did not see it. Very upsetting.

Information about the shooter/shooting is still scarce. @neontommy has a few more details:

The suspect fled toward Exposition Boulevard, just south of the campus center. He was wearing a white baseball shirt with red sleeves.

A pair of Neon Tommy reporters in the Campus Center courtyard at the time reported that didn’t hear gunshots, but “a mob people” fled from the main campus center building. The Campus Center contains a study area beneath on the entrance floor. In the basement level are the student radio station, a campus bar, a small concert venue adjacent to the bar and a grand ballroom.

Judging by the webcam tape on http://t.co/6i3YtClf it appears the shooting occurred at ~11:15pm at the Tutor Center. DPS arrives at 11:22. 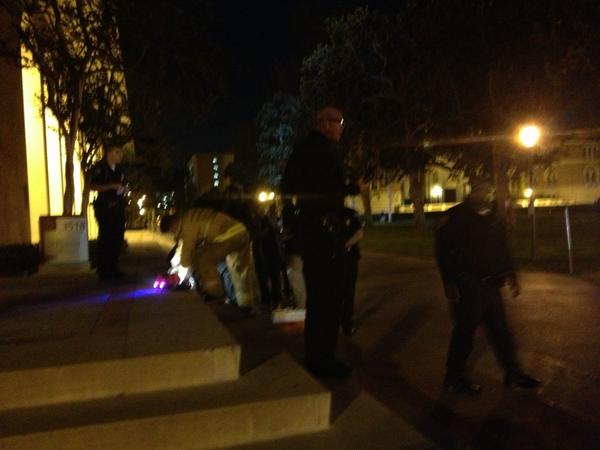 We are seeing conflicting reports as to the status of the suspect. One Twitter user says the alleged shooter has been caught and that two suspects have been arrested:

Contrary to the last report, @USC just tweeted out suspect is at large.

@johnie_freatman Yeah, gunman supposedly fled toward Exposition so I don't know he could be apprehended on campus…

A fourth victim has reportedly been located:

USC: LAFD just found a 4th patient also with a GSW to the back

There was another shooting at a Halloween party in Hollywood tonight. Unclear if the two shootings are related.

I was supposed to go to both of the halloween events in WeHo and at USC and they both had shootings. #thatsjustLAthough

Doesn’t sound like the primary suspect has been arrested:

Just so we're clear: Suspects have been arrested, but the alleged gunman is still at large. Stay inside, lock up, Trojans.

None of the victims were USC students?

According to a few people who were at the party in TCC, none of the victims are #USC students.

The LA Times has an eye-witness account of the shooting:

A USC student, who asked not to be named, said a student group was hosting the party and that it was at maximum capacity. The witness said there were about 100 people outside — as well as some campus police — when at least four shots rang out.

“Everyone started running. I saw a guy who was shot in the leg. He was limping and screaming for his friends to help him. ‘I got shot. can someone give me a ride.’ his friends were helping him walk,” the witness said. “People were screaming and running away.”

As noted above, it seems as thought the primary suspect is still at large, but at least one person was arrested:

Heading to #USC for the shooting. Anyone hear or see anything and wanna talk to the LAT, let me know.

@StephSayinStuff Hi Stephanie, can you please DM me your number so we can chat? Thanks.

Shooting reported in the area of the Tutor Campus Center on UPC Campus. Shelter in secure location; avoid opening doors for unknown persons.

What took them so long?

RESPONSE: USC took ~29 minutes to alert students about a gunman on campus. @USC took more than an hour to Tweet the alert.

Shooting suspect is still on campus?

via @latimes: "Police believe the gunman was not a USC student and that the shooting was tied to a dispute not related to the university."

Our thoughts are with the victims.

USC confirms that the suspect is now in custody.

Trojans Alert: Threat is over. No students, faculty or staff involved. Campus open to those with USC ID. Classes resume in morning.