‘Game over, NPR’: Chief Justice John Roberts hammers what should be the final nail into Nina…

Tennessee Titans running back Chris Johnson seems very happy to have won that championship belt! By the looks of his friend’s finger, we’re guessing he isn’t as excited.

@3HL1045 @D1sports @ChrisJohnson28 Why do people have to flip off the camera? It's stupid and tasteless. Great example for kids to follow.

No word on what CJ did to win the belt. Chances are he just bought the thing off eBay for a few bucks.

Either way, he displays it proudly above his locker. 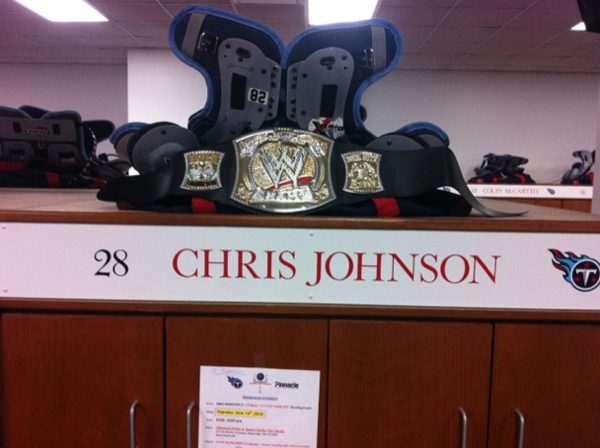 We have to admit, that looks snazzy! Let’s take a quick look at what a few others are saying:

Jeez! Tweeps will never be satisfied until real titles are won.

‘Game over, NPR’: Chief Justice John Roberts hammers what should be the final nail into Nina Totenberg’s Sotomayor-Gorsuch mask-erade coffin

Johns Hopkins’ Dr. Marty Makary: ‘…cloth masks have almost no impact on transmission whatsoever, and we basically have known that the entire time’

Reminder: Just 5 years ago 32 Senate Dems signed a letter calling for preservation of ‘important tradition of the Senate’

‘Game over, NPR’: Chief Justice John Roberts hammers what should be the final nail into Nina Totenberg’s Sotomayor-Gorsuch mask-erade coffin