The United States gave Syria’s Bashar Assad a stern warning Monday, promising that there would be consequences if the country crossed the red line of using chemical weapons. Has that line been crossed? Several news outlets are reporting tonight that Syria has mixed the chemicals to produce the nerve agent sarin gas and begun loading it into aerial bombs, provoking fears of war and possible U.S. military intervention.

"[Syrian] military has loaded the precursor chemicals for sarin gas into aerial bombs that could be dropped from dozens of fighter-bombers."

Beaking news: Sarin gas has been mixed in Syria. All that is needed is to put it in a weapon. Pray that it is never used!

oops are the mayans going to be right, with the sarin gas news?

Assads loading up his Sarin gas… He's got 60 days to use it. Countdown to World War III fools.

Syria mixing Sarin gas. The world is going to come down on Syria if this chemical agent is deployed. #Obamathisisyourtimetoshine

The world is extremely dangerous tonight because of Assad mixing sarin gas while Obama twiddles his thumbs in the WH.

Ok, true test for the POTUS…what will he do about Syrian military mixing deadly components of Sarin Gas? Will this be a "red line" moment?

Some are questioning the credibility of the reports. How is a person supposed to trust the partisans at Fox? Or CNN? Or in the intelligence community?

@foxnews – Some breathtaking neocon propaganda psyop about Sarin gas being prepared for use in Syria. It's garbage..http://t.co/4cLSJnOL

Sad times we live in. MSM reports Assad ready to use Sarin Gas & a person has to question if the story is true or not. #NoCredibilty @CNN

It took 10 years for our Govt to find Osama Bin Laden but supposedly we know for a fact that Syria is mixing Sarin Gas for Bombs? Doubt it.

Here’s a late-breaking update from the White House: a photo of the president and first lady walking down the stairs.

Photo of the Day: President Obama & the First Lady walk down the stairs before a holiday reception at the White House: pic.twitter.com/AsAnX80i 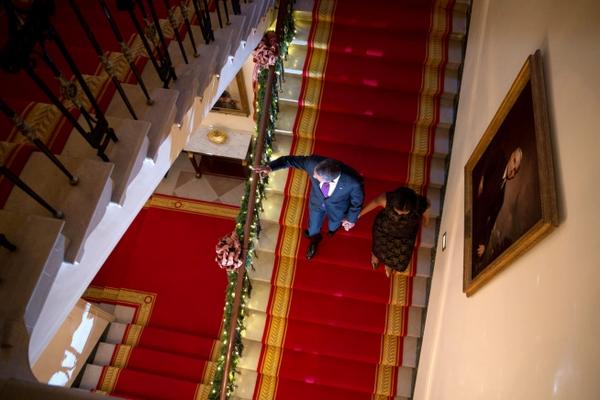 @whitehouse Syria is mixing sarin gas and you guys tweet out a pic of the white house holiday party? Unbelievable!