BAWK BAWK! Trudeau claims he’s ‘isolating’ for 5 days due to COVID exposure and…

Howard Stern reiterates that he’s ‘against any kind of censorship,’ but Neil Young was…

UNGOVERNABLE: Blue-check nobody Chip Franklin asking tweeps to describe Joe Rogan ‘in one…

BOOM! Winsome Sears takes PolitiFact to the WOODSHED for calling her a liar

‘Wake up, parents’: Schools in Flint, Mich. are ‘sticking with remote learning…

Sen. Chuck Schumer and his Democrat buddies are swamped these days, what with constantly having to think of new ways to subvert the Second Amendment. So, in order to make his job a little easier and focus on the task at hand, Schumer is calling on gun retailers to suspend sales.

It’s really not a big deal, though. See, Chuck figures that if Congress decides to limit access to legal firearms, then all those sold firearms will just be pain’s in the government’s neck. And that’s no fun.

So, don’t engage in legal firearm sales until we figure out a way to make those sales illegal!

Chuck Schumer asks Walmart not to sell guns until Obama can find a way to outlaw the sales of guns. Looks like Walmart will not reorder ammo

Good ole Chuck Schumer wants to take our guns away! See what he does in his spare time! #tcot #tlot #pjnet pic.twitter.com/ZlyERGcf 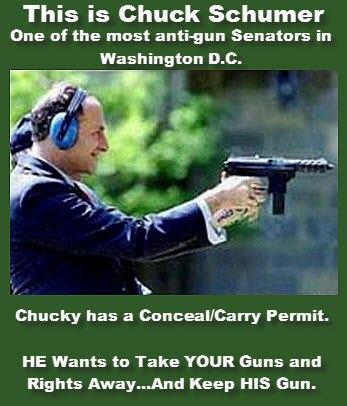 NY Sen Schumer wants gun retailers to halt sales. Yes, this govt is after the 2nd amendment & all of you who "bitterly cling to your guns"!

Schumer Asks Gun Retailers To Stop Sales As Congress Debates.SURE LETS JUST THROUGH OUR HANDS UP IN DEFEAT ALREADY.

Senator Schumer asks gun shops to stop selling guns. Funny, because Politicians are the reason why guns continue to fly off the racks.#Tcot

So, Senator Schumer wants gun retailers to stop sellling guns while Congress determines our fate!!! Anyone think they should stop? #buynow

Hey Chuck Schumer, why don't you just ask the criminals to voluntarily give all their guns back? #dumbassery

The View’s harpies have a spirited, one-sided debate about how Amy Coney Barrett and Clarence Thomas are sex and race traitors [videos]