On December 7th, 1941, the Japanese attacked the U.S. Naval base at Pearl Harbor. Over 2,400 Americans lost their lives.

This is how the White House looked on the night of the Pearl Harbor attack. Note the people standing vigil. pic.twitter.com/GVazXq8l 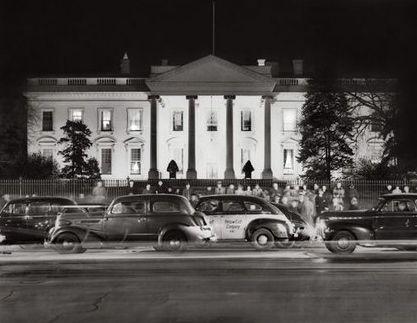 Today, 71 years later, Twitterers are honoring the men who died for our country:

May God bless our valiant military members and their families who defended our freedom and nation at Pearl Harbor on December 7, 1941.

Dec 7, 1941: A Day That Will Live In Infamy. God bless the Americans killed & injured at Pearl Harbor. #AlwaysRemember #GreatestGeneration

December 7, 1941. A date which will live in infamy. I cannot say THANK YOU enough to the #GreatestGeneration! My generation, take notes!!

Never forget the bravery shown by our nation's heroes at Pearl Harbor on this day in 1941, and never lose our American strength and pride.

Rest in peace to all those who lost their lives on this day in 1941. #neverforget

My most heartfelt gratitude to all those who perished at Pearl Harbor on December 7, 1941…

May we never forget those who gave the ultimate sacrifice on December 7, 1941. May they all Rest in Peace.

On this day let's remember the sacrifices of the men and women of Pearl Harbor on December 7th, 1941. #GodBless

December 7, 1941—a date which will live in infamy. Take a minute to remember the fallen and say thanks to our current soldiers. #PearlHarbor

Today in 1941, The United States was attacked at Pearl Harbor. While I remember the lives lost, I will in some sense always be grateful.

This day lives in infamy, but should also be remembered with pride, for treachery fell from the skies, and was answered with valor.

Many are also paying tribute to relatives who were at Pearl Harbor when it was attacked:

Today, 71 years ago, my grandfather was involved in an attack on Pearl Harbor and survived to tell his story. #SupportYourTroops

71 years ago, my grandfather swam to the shores from his ship in Pearl Harbor. My dad also was one day old. Thankful for our veterans #usa

My grandfather was at Pearl Harbor 71 years ago today. He was a rescue diver. #PearlHarbor

My great Grandfather was in the navy and serving at Pearl Harbor on this day 71years ago.

My Great Grandfather was president of the Pearl Harbor Survivors until he passed away in 2005. An amazing story for the U.S.. Never Forget!

Just realized its Pearl Harbor day.. Thank you to my great grandfather for fighting that day to keep our nation safe ?

Pearl Harbor. December 7th, 1941. My grandfather was on the ground there. I will never forget.

And neither will we. God bless all those who fought and continue to fight for our country.