Earlier today, corruptocrat Attorney General Eric Holder told a group of University of Baltimore law students that he may not be sticking around for another term:

“That’s something that I’m in the process now of trying to determine,” Holder said.

Holder says he needs to sit down with his family and President Obama to see if he wants to continue on the job.

“Do I have gas left in the tank? It’s been an interesting and tough four years, so I really just don’t know,” Holder told students.

You can watch the video here.

Conservatives are hoping as hard as they can that he decides to resign:

That decision should've been made for him MT @ReutersPolitics: AG Holder tells law school audience he does not know if he will stay in job

Good! @BretBaier: AG Eric Holder tells law school audience he's not sure if he will stay in @BarackObama's cabinet–who else?

@glennbeck Oh I just heard the greatest news. Eric Holder said may not stay for 2nd term-my prayers have been answered on that issue

I will be praying tonight, praying to Jesus that Eric Holder makes the right decision and resigns… please Lord, this man is so corrupt

Eric Holder has announced he may not stay for a @BarackObama 2nd term. The most racist and corrupt AG will not be missed at @TheJusticeDept

Hey! A bright spot! 🙂 RT @bretbaier: AG Eric Holder tells law school audience he's not sure if he will stay in @BarackObama's…

Dear God in Heaven, please let this be true. Eric Holder says hes not sure hell stay on http://t.co/rADAS6cd

He's done all the damage he can do. RT @postpolitics: Eric Holder says hes not sure hell stay on http://t.co/rb9HmNHK

A few people think Holder might step down because he has higher aspirations:

Good, unless its to be appointed to SCOTUS: RT @DRUDGE_REPORT: REPORT: ERIC HOLDER MAY NOT STICK AROUND FOR 2ND TERM… http://t.co/RXTLsNbH

Eric Holder just said he didnt know if he was going to stay in his position. Yep! Justice Holder here we come!! #tcot pic.twitter.com/dyRTskP3 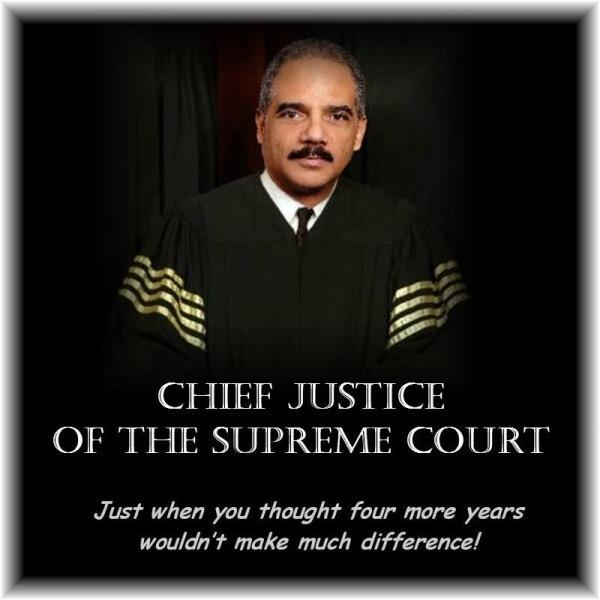 But if Holder leaves, that opens him up to well-deserved prosecution:

@secupp So Holder might resign. Good – it will make him easier to prosecute.

As long as he leaves in leg irons. RT @DRUDGE_REPORT REPORT: ERIC HOLDER MAY NOT STICK AROUND FOR 2ND TERM… http://t.co/B5SqyviO

Now that would be justice.