That’s right. Evidently, vile death threats aimed at NRA members isn’t enough. Now there is a video game where one can shoot NRA President David Keene in the face. Ah, new tone! Twitter users point out the irony: Anti-gun zealots who aim to shoot those with whom they disagree.

Gateway Pundit reported on the downloadable game, and the forum wherein members discuss the game. “On the one hand, f*ck the NRA,” says one member. Then he, and other members, go on to worry that it might make fellow anti-gun zealots look bad. You think?

As per usual, it is those who walk in leftist lock-step who hurl hate and violent wishes.

The creator of the game identified as gizmo01942 Ediot says, “Share this everywhere, especially gun-nut and anti-game websites. Also see if you can’t send it in to the NRA somehow, like through the feedback on their website or something.”

And two more images from the downloadable game (Warning: Graphic).

Twitter users continue to react with disgust at this appalling game.

Anti-gun zealots hate enough to kill with a gun! RT @BettinaVLA New Leftist Video Game: Bullet to the Head of the NRA http://t.co/MYSmVVRl

New Leftist Video Game – “Bullet to the Head of the NRA” http://t.co/qofsLs5F Anyone who thinks the Lefties are peaceful.. WAKE UP!

And, paging the lapdogs in the media!

Hmm. Sorry, they are too busy clutching their pearls over an NRA app.

Despite criticizing video games, the NRA still sells them: http://t.co/Dxps7mnw 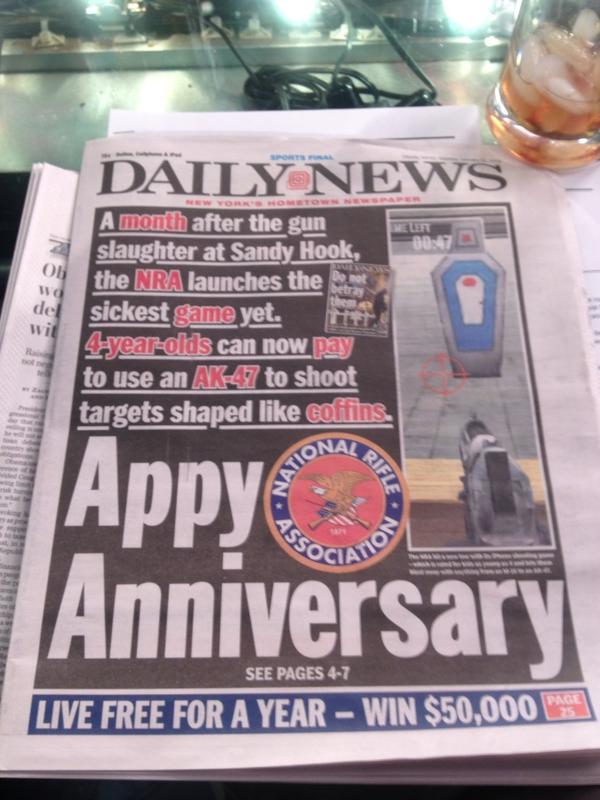 Except, of course, the NRA app is not sick. And is not giddily saying “F*ck” anyone, nor allowing users to kill men by shooting them in the face.

How is the NRA iphone app an example of video game violence? It teaches gun safety. https://t.co/CfS7BC7t

It tickles me so that the NRA just released a shooter video game approved for children because I sometimes forget what hypocrisy means.

Hypocrisy? Sorry, buddy. Anti-gun zealots have that base repugnantly covered.

Update: The NRA app that has members of the media clutching their pearls may not even be an NRA app.

NRA target game blamed on NRA is a hoax: http://t.co/D1SggOGY