The insane Iranian president Mahmoud Ahmadinejad addressed the United Nations General Assembly today. Twitter watched so you didn’t have to. The crazy, it scorches.

A-jad says capitalism is the source of the world's problems. Hasn't he been listening to the Obama Administration about The Video?

Yeah, Iran is all about social justice. Unless you get accused of witchcraft. Then you're in deep trouble.

A-jad's translator sounds a little worn out by all the crazy.

Howard Dean weighed in, with no “Yeaaarrrggh.”

The biggest hit? The empty seats. 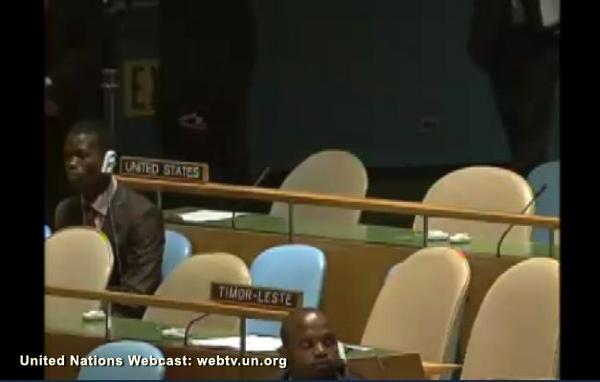 The U.S.'s empty seat at the UN for Ahmadinejad's speech is the first time I can heartily applaud Obama's empty seat.

Yes, unlike earlier in the week.

The despot then railed against The Jooooos!!!11 as “uncivilized Zionists.”

So #Ahmadinejad at #UNGA went all Marxist, followed by a bout of messianic fervour. Before returning to the Zionist 'enemies'. Obvs.

Our nation Is continually attacked by uncivilized zionist power: Ahmadinejad.

You can go to the crazy video tape here:

Others noticed something familiar about some of his speech “points.”

Where @SooperMexican feel like doing some more Word clouds? Obama vs. Ahmadinejad

Boy, our little devil Ahmadinejad could be the DNC Chair with some of this rhetoric… #WWTJD #tcot #UNGA

Ahmadinejad. Is blaming "others" …Hummmmm! #ahmadinejadorobama

The madman has some equally mad supporters, as this prescient Twitter user guessed.

Yep, here they are:

#Ahmadinejad says what most leaders are afraid to say mainly the truth. I think arab leaders need to stop kissing ass #Yemen

Just unfriended someone on Facebook who said he was impressed by Ahmadinejad's speech at the UN.

Ahmadinejad makes sense, speaks more truth than ANY western leader. Freedom and a good life is FOR ALL, not just those who can afford it

Shame on the U.S delegates that are uncivilized to listen to the truth, Wise up U.S Ahmadinejad is more Wise than you, We love [email protected]

The Zionist #Israel #USA and #Canada all walked out during Ahmadinejad's speech. They couldn't handle the truth. #Iran

This comprehension-challenged person turns it around on the evil Tea Party.

Dear #tcot: take a good look at Ahmadinejad. Now look at you. Now tell me again how you want a theocracy. #Mirror

You need to use that mirror yourself, toots.

The wacko then went on to attempt to play the feminist. Such the ladies man, that A-Jad.

Ahmadinejad: "Woman sublime role has been damages" Translation: "we want all women to use burka and be our sexual slaves"

Yes, because cleavage. It causes earthquakes and all. Iran totally shatters the glass ceiling! By throwing rocks, as they stone women.

That’s right. And guess who was silent when Iran was given a seat on the United Nations Women’s Rights Commission? The Obama administration and lying liar Ambassador Susan Rice:

A week later, and they remain mum. Not one word of denouncement from President Obama, who is too busy demonizing one of our own American states and and ignoring devastating floods. Too bad we can’t call ourselves “Los Women”. Maybe he’d give a hoot then. Ambassador Rice also refuses to comment, which is the status quo with her, evidently. The State Department, headed by Hillary Clinton, she of “not staying at home baking cookies” because that would be demeaning fame, is silent. Except for one anonymous official, who said this:

“We’re not going to stand up and cheer,” the official said. “By the same token, that is less onerous than the Human Rights Council because women in Iran, relative to other countries in the region, actually have greater rights.”

“You don’t have women placed in head-to-toe burkas in that country,” the official said. “You have women elected to the legislature in the country.”

Oh, well, as long as you don’t cheer. It’s not like it’s human rights and all. It’s just pesky women! And it’s not like they require head to toe burkas!  And by not required, he means they totally are required. It’s national law and Iran recently announced they are cracking down on it, especially if a woman dares to be suntanned.

But, hey, tolerance! He continued to drone on and on as only the truly insane can.

Oh boy, Ahmadinejad is starting his speech with Adam. This could take awhile.

Somebody hand Ahmadinejad a Big Gulp so Bloomberg will tackle him and end this.

Mahmood Ahmadinejad spoke for about 10 minutes about Shia Muslim belief in the 12th Imam Al-Mahdi and how he'll save the world soon.

And Human Events’ John Hayward brings it all home.

It was hard to make out what A-jad said in his UN speech over the sound of all those bumps in the road.