Christian rage? What on earth could have possibly sparked that? Oh, just a little truth, of course. The truth always makes the Left lash out.

This week's Newsweek cover, on newsstands & the iPad today: #MuslimRage! Ayaan Hirsi Ali writes on how she survived it pic.twitter.com/QPnlRtf9 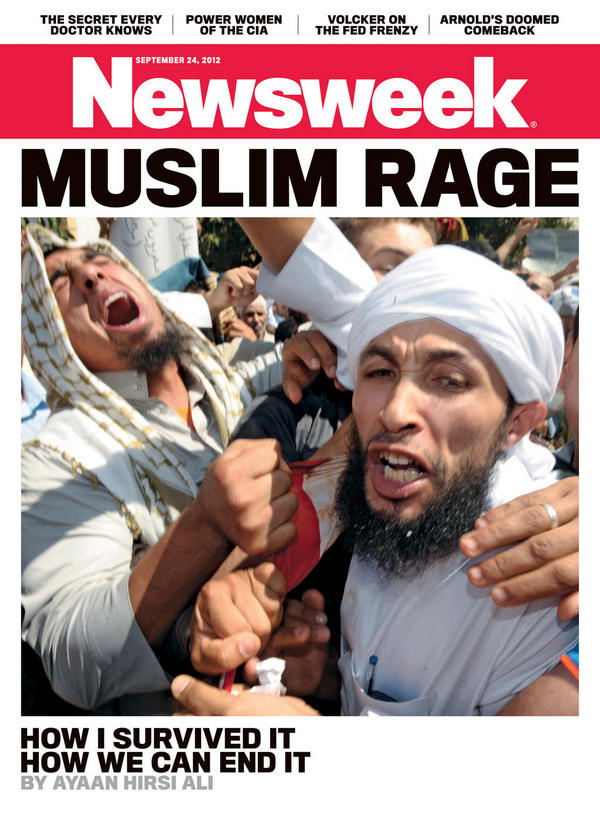 Want to discuss our latest cover? Let's hear it with the hashtag: #MuslimRage.

Hey @Newsweek, I didn't know Sam Bacile did your covers.

In its own ugly way, this Nwesweek cover is almost as inflammatory as the Muhammad video itself: http://t.co/51fk1y1F

See? Get ready for a visit!

RT @ExJon: In case DOJ wants to take her in for "questioning" MT @DylanByers: BOOM: Ayaan Hirsi Ali, author of #MuslimRage, will be on MSNBC

Free speech, shmee speech! Of course, they are likely upset that the article is penned by Ayaan Hirsi Ali, who always brings out lefty bile. The sick and delusional comparisons begin.

Or Christian Rage? RT @acarvin: . @Newsweek when are you doing the counterpiece called White rage? #MuslimRage

RT @betsdavenport: @geoff9cow They need to do a cover sorry on Christian rage. / you want another story on Michele Bachmann? 🙂

Any chance Newsweek will do a "Christian Rage" cover story on scary southern evangelicals? No? Oh. -___-

Sigh. Once again, the Left is worshipping at the shrines of multiculturalism and moral relativism. Then came the absurd #ChristianRage hashtag, which appears to be just an excuse to let out some lefty Christian hate and mockery.

No purity rings in your size. #christianrage

Get it? Christians are all icky and uptight and stuff. Or something.

Dude. Is he kidding us?

I can't get everyone to conform to my beliefs!!!! #ChristianRage

@elisefoley infrequent churchgoers taking up all the pews at Christmas #christianrage

@elisefoley These #christianrage tweets are killing me this morning. Ty for turning my anger over the cover into giggles.

Christian mocking is hilarious! Of course, there is no cause for concern.

They won’t go on violent rampages, nor call for beheadings.

What cowards you are, lefties.