Happy New Year and happy payday! Thank goodness our “lord and savior” Obama signed the fiscal cliff bill into law after proudly proclaiming, “Under this law, more than 98 percent of Americans and 97 percent of small businesses will not see their income taxes go up.”

While PolitiFact will likely rate Obama’s statement “Mostly Swoon,” around 70 percent of Americans are going to pay more taxes in 2013. If you like your payroll taxes (and even if you don’t), you can keep them and pay two percent more than you did in 2012.

Earlier this week, many Americans realized the “fair share” fiscal cliff deal didn’t seem so fair. One Democratic Underground commenter was a little behind yesterday and was shocked — shocked! — to learn that the fiscal cliff crapwich didn’t extend the payroll tax holiday. (They don’t call ’em DUmmies for nothing.)

The price for having your head in the sand just went up. http://t.co/YOELoFHN #tcot #tlot

“What happened?” he asked. “My paycheck just went down by an amount that I don’t feel comfortable with. I guarantee this decrease will hurt me more than the increase in income taxes will hurt those making over $400,000.”

How’s that class warfare working out for ya, pal?

The the "Elections Have Consequences" file. HAHAHAHA http://t.co/qKu3vAm7

Yep, elections have consequences, and here’s how all those cries of “Eat the rich!” are working out:

Anyone who earns a paycheck WILL be paying more in taxes, despite congress' protestations otherwise. #FiscalCliff pic.twitter.com/dJReq1k4 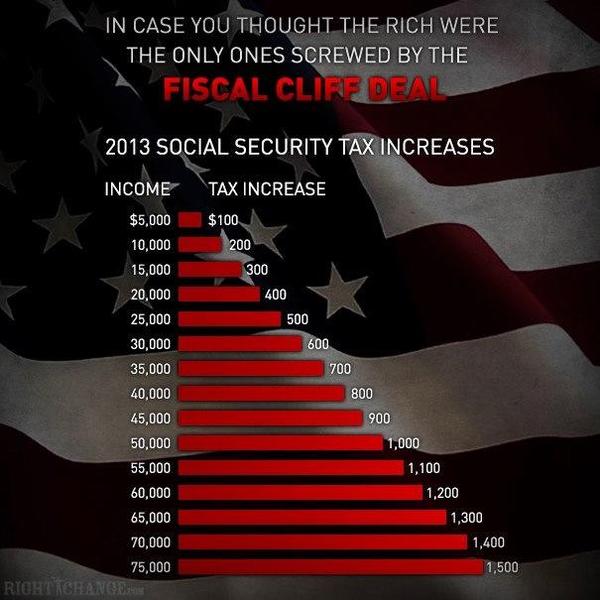 As the first pay period of 2013 comes to a close, employers are being forced to ring in the new year by explaining why their employees’ checks are smaller.

The gild is off the lily. My employees were genuinely perplexed by the higher taxes reflected on their pay checks today. Seriously?

just noticed ALL my employees, part time, hourly, etc, will have more tax $ taken out of their checks, contrary to president's promise. LIAR

Late night payroll. I dread explaining to my employees why their checks are smaller tomorrow. That tax cut was nice while it lasted.

Indeed, some employees are baffled by their shrinking paychecks.

Did new taxes go info effect today? Something I don't understand about the fiscal cliff? I got a raise, and yet my paycheck got smaller …

American workers are feeling the pain, and it’s definitely not just the rich.

I thought Obama wasn't going to raise taxes on the middle class, but my paycheck was down by 2 percent today. That
Kind of hurts. Yikes!

Obama promised not to increase taxes on families making less than $250,000. Why do I have $30 less in my paycheck Mr. President?

Objects in paycheck may be about $10 less than what you're used to. Thank you new social security taxes.

@ChrisWarcraft 1st paycheck noticeably smaller after the FC was avoided. Glad hard working politicians got a raise tho. #crooksandthieves

Also yay for my paycheck being smaller because of Social Security! Totally winning this week, you guys!

@barackobama please explain why my paycheck was less this week than I normal. I thought "99% of households" wouldn't see taxes raised #kbye

Most recent paycheck gutted by taxes. Thanks Obama, so much for not raising my taxes. Last time I checked I wasn't raking in over $400K

My already small paycheck gets smaller, thanks Obama. #traitor

Ah, first paycheck of the year, first view of my higher taxes. And people say the government can't work fast.

Got my first paycheck post-deal today. As expected, my taxes went up. Since I make less than $25k a year I guess I must be an evil rich guy.

Just got my first paycheck of 2013, with this tax change I'll be frequenting thrift shops!! http://t.co/OXbJIDTd #taxes

Objects in paycheck may be about $10 less than what you're used to. Thank you new social security taxes.

The first tax increase has processed on my paycheck 🙁 #taxes #socialsecuritytax

Just looked at my taxes for my first paycheck of the year!!! …. Makes me very upset ??

Just got my first 2013 paycheck. I must be rich cuz my taxes were raised. Everyone: check your take home pay. Retweet the misery. #lnyhbt

My wife got her first paycheck of the new year, $100 smaller then normal… If this continues we will have $5200 less #ThanksObama

Social security taxes want up. My paycheck is now smaller than it was before I got my raise. Joy.

Maaaaaaaan these higher taxes have crushed my damn paycheck! Shit was short 51 dollars ?

Ouch. The newly imposed taxes actually took a decent chunk of cash out of my paycheck.

And you know whose fault that is, right?

Just opened up my paycheck, they said that the payroll taxes were going to be hit…FUCKING REPUBLICANS!!!! @Polo_Nolo @lowe_nolan

Of course. But there may be one silver lining in all of this:

After seeing my paycheck today I am officially a republican voter. Almost half of my paycheck gone due to raises in taxes. FUCK. THAT.

It seems many more Americans are simply baffled by the change in their paychecks.

How many voted their way to a smaller paycheck?

Conservatives (and liberals) react to The Twitter Files Part 2, Twitter’s claim that it didn’t ‘shadow ban’