The National Hurricane Center is expected to officially call the disturbance currently in the Gulf of Mexico a tropical storm by later this afternoon.

#TropicalStorm #Debby about to annouce her presense.

Hurricane hunters seem to have found a closed circulation in the Gulf tropical system. Tropical Storm #Debby could be named soon. #fb

From the latest projections, the system has the potential to make landfall anywhere from Texas to Florida.

Presuming the @NHC_Atlantic is about to name 96L #Debby, I would not want to be the person that has to draw the cone: http://t.co/hnXg2ryP 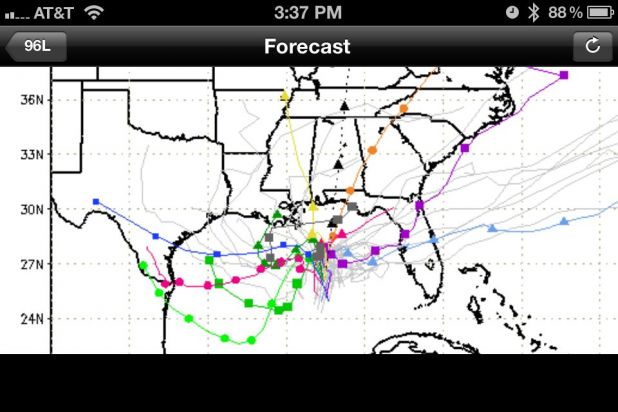 But, reaching hurricane strength is still possible. Especially if the Texas solution is correct, like the Euro suggests. #debby

Given the ECMWF's track record, my gut tells me that soon to be #Debby is headed for TX next week. Time will tell.

Wow entire state of TX is in cone of uncertainty! @TWCBreaking #Tropical Storm #Debby has formed in the Gulf of Mexico. http://t.co/hdQ3OJQq

If you live in one of the potential paths of this storm, be safe.

The storm has officially been categorized as a tropical storm by the National Hurricane Center.

Side note: #Debby is the earliest "D" storm to form on record, surpassing Dennis in 2005, which formed on July 5. /KT

‘STILL lying his a*s off’: Obama tells vapid crowd he’s PROUD to pay 40 cents on every dollar in taxes, gets BUSTED by his tax return

‘New and DANGEROUS litmus test’: Jonathan Turley’s mini-thread dismantling Nancy Pelosi for smearing ACB over the ACA is a TKO

‘Imagine if’: Ben Rhodes decries our electoral ‘system,’ gets reminded about the brilliance of the Constitution