Remember how we were all assured that we’d love Obamacare once we found out what was in it? People are already noticing shrinking paychecks, and with 2013 only three days old, people are already turning to Snopes.com — a site dedicated to debunking urban legends — to make sense of the country’s new Medical Excise Tax.

What now? We thought that only “the rich” were going to be paying more in taxes.

check you store receipts for your new "Medical Excise Tax"

"Medical excise tax" showing up on receipts … I'll only be purchasing bare necessities from now on.

@heifer109 If this is accurate, I understand why Obama flew out to Hawaii. Probably should stay off the mainland awhile. #medicalexcisetax

The Medical Excise Tax is real, and it kicked in Jan. 1. In short, it’s a 2.3 percent tax on medical devices. There is a retail exemption that covers “devices that are of a type that are generally purchased by the general public at retail for individual use,” as well as exemptions for eyeglasses, contact lenses and hearing aids.

The tax is supposed to be “hidden” from the consumer, but it was brought to the public’s attention when receipts from hunting and fishing store Cabela’s showing the tax as a separate line item went viral.

Welcome to Obamacare everyone! The Medical Excise Tax. Anyone still believe BO didn't raise taxes on the middle class? pic.twitter.com/hobsVNYd 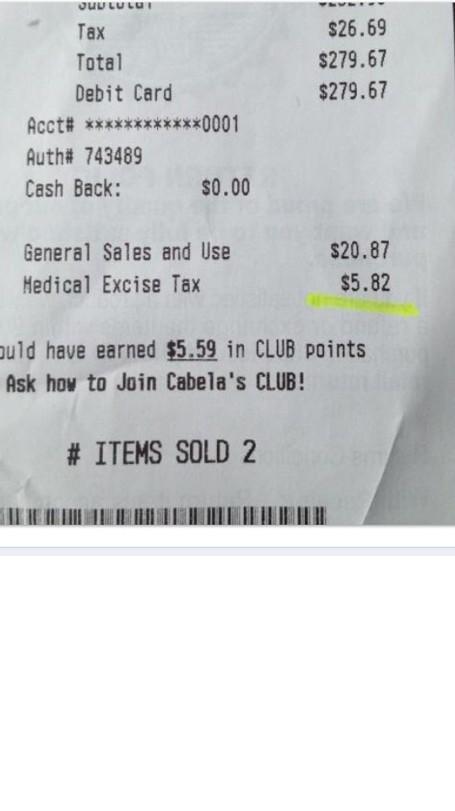 @Cabelas What's the dealio with the "medical excise tax" showing up on your receipts? Seeing pics all over…is that for real?

Cabela’s has since explained that the charge was a “glitch,” and that anyone who believes they were charged incorrectly should see the store for a refund.

The “glitch” does, however, demonstrate the confusion that still surrounds Obamacare. The tax is intended to apply to manufacturers and importers and is expected to raise $29 billion over the next 10 years to help pay for Obamacare, but that cost will almost certainly be passed along to the consumer through higher prices.

My dentist just discovered the medical device tax in Obamacare. He didn't think dentistry wld be affected. He will have 2 raise prices now

So, even though the tax might not show up as a separate line item on your receipt, that doesn’t mean you’re not paying it. And if it does show up on your receipts, it’s probably real, and you should get used to it.

I know the Cabela's "medical excise tax" was an error. Point: 1.That there is such a tax. 2.Prices going up to cover costs of Obamacare.

So what's up with the Medical Device Tax? Obama told me I wouldn't see my taxes go up one cent. Did he lie? 😉

Obama is out to TAX US TO DEATH, via payroll, dividend, capital gains, medical device, FSA and Medicare taxes. #shameonobamavoters

Taxed to death? Is that covered under Obamacare?