A man identifying himself as Dr. James McArthur, a “physical culturist, social-pathologist/observational theorist” and “independent urban combat correspondent, journalist contributor, radio guy,” today live-tweeted what he claims is a raid on his home by Baltimore police.

the polive have found me

its about to be over

trying to kick down door

please someone help me

Baltimore Police say they are in a barricade situation outside the home of a Baltimore blogger.

Police tell WBAL News that they are outside of the home of James MacArthur in the 600 block of McKewin Avenue in Waverly.

A spokesman would only confirm that they are executing an outstanding warrant.

While police are outside of MacArthur’s home, he is broadcasting over the internet through his website and tweeting live.

McArthur claimed the raid was over a missed court date.

"All this for a missed court date? You obviously know where to find me. I'm a creature of habit. I'm on email, twitter etc" @BaltoSpectator

"A SWAT team for missing a court date. I've never violated ANYTHING, I go to work every day" –@BaltoSpectator

While the story unfolded on Twitter, McArthur won fans and support.

hey #anonymous if you arent paying attention to @BaltoSpectator plz do so now. hes live tweeting swat at his door for "failure to appear"

@BaltoSpectator channel 13 is following it stay alive tell the story later whatever is up….dont upset your mom and lil girl

@BaltoSpectator James there are too many people watching live for police to consider hurting you. Tell them you're coming outside.

The Baltimore Sun is also reporting on the standoff:

A Baltimore blogger wanted on a court-issued warrant barricaded himself inside a Waverly home Saturday night, posting on social media and broadcasting live on Internet radio with officers outside.

Police said Frank James MacArthur, 47, refused to come out of his home in 600 block of McKewin Ave. for officers trying to serve a warrant issued in June by his probation agent stemming from a 2009 gun case, according to police and court records.

MacArthur, who has said he was never notified about the court date, has been posting on social media this week about his “fugitive” status and predicted police would try to harm him.

A calm-sounding McArthur is also using Spreaker.com to broadcast from inside his home.

McArthur is currently negotiating live with a Baltimore police officer and streaming the audio. Why such an elevated response to a “minor incident”? These tweets sent out earlier today, likely:

wondering if I should definitely try to take a few out on my way out, or just go out zen style, no resistance

I have been resisting all my life. at this point causing more bloodshed might not amount to much

poor guy I take out might have a family. he probably just following orders…

“A tweet will not kill you,” McArthur told the officer, claiming “excessive force” and “overkill” in the police department’s response.

Twitchy will continue to monitor the situation.

The @BaltoSpectator saga seems to drawing to a close, with hundreds tuned in to the live audio stream as McArthur negotiates his exit from his home.

Says he's about to surrender. RT @mobtownshank: If you're not following what's going on with @BaltoSpectator – you should be.

Why won't a friend of @BaltoSpectator come by to help escort him out, as opposed to the cops tearing down the doors to arrest him?

@rolandsmartin he said he doesn't have any friends.

@rolandsmartin The more I listen, I realize its because he doesnt have any friends

McArthur has finally signed off around 11 p.m. Roland S. Martin has taken an interest and is advocating on McArthur’s behalf. (Yerg is the officer who negotiated with McArthur; Maryland Delegate Jill P. Carter is his lawyer.)

yes @BaltoSpectator, I'm listening to you. @mrdaveyd made me aware of you and your plight. And we're monitoring this all the way

hey @BaltoSpectator! go to the bathroom. we'll send a tweet and email your lawyer

Hey @jillpcarter. your client James MacArthur @BaltoSpectator is about to get arrested by Baltimore PD. So go to the police station

Here’s a photo from the scene:

As close as police will let me get to the @BaltoSpectator scene pic.twitter.com/2G4gBhPY 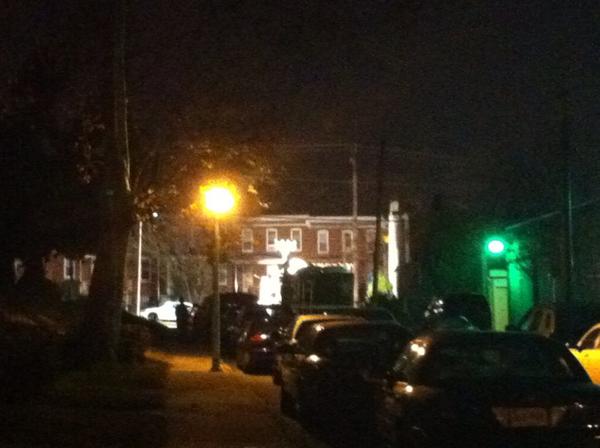 Standoff over, per Baltimore Sun reporter at scene. RT @justingeorge It's over. Is in custody. #BaltoSpectator