Players were pulled from Turner Field in Atlanta tonight as angry fans threw bottles and other debris onto the field to protest a disputed infield fly call in the eighth inning. Replacement umpires, anyone?

We know where the replacement refs work now. Turner Field

What this country needs is some replacement umps.

I'm starting to come around to the replace-umps-with-robots argument.

Do we have replacement umps at Turner Field?

I dont consider myself a baseball rule expert.. But I'm pretty sure that was the shittiest call ever. #Braves #atlbraves

As bad a call as I've ever seen in MLB. To blow that call during a 1 game playoff is unthinkable.

I just saw the worst ump's call I've seen in 45 years of watching baseball. Would have embarrassed the NFL replacement refs.

No matter how bad the call, many were appalled at the fans’ behavior.

And all hell has just broken out at Turner Field. Oh my goodness

Ugly scene at Turner Field now…Fans tossing all sorts of stuff on the field to protest call…players called off the field for safety.

Anyone recycle? There's a jackpot on Turner Field.

The call was horrible, but this display in Atlanta is disgraceful. 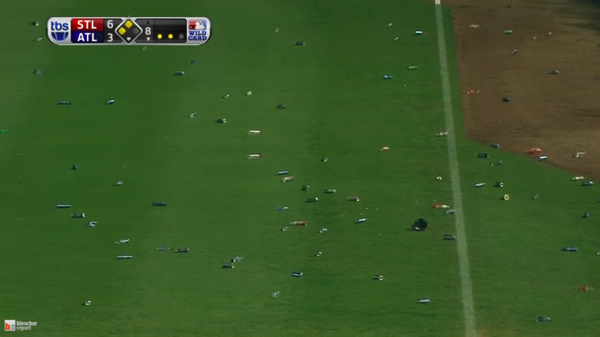 Don't blame Braves fans, they were just trying to make Turner Field look like the rest of downtown Atlanta.

Others took a different view.

Call me unclassy ALL you want, if I was in Atlanta I'd be the first one to throw a glass bottle at the back of an umpires head. #Braves #bs

Class? If you're at turner field and haven't thrown anything on the field yet you need to leave

I can't blame Braves fans for throwing trash on field. It's fitting: that call was a total garbage–and I'm rooting for Cards.

Clear the stadium. Then resume play. Any other choice now?

@chucktodd Yes, clear the field of umps, load the bases, make it 1 out, and let players ref the game–like basketball at the Y.