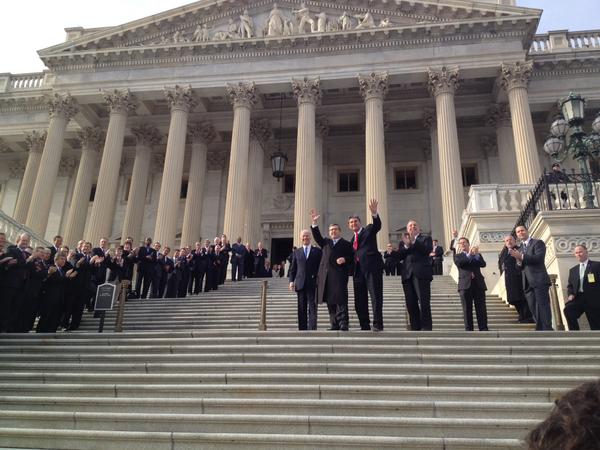 Will never forget seeing my capitol hill family from the cap steps today. #Amazing, so grateful.

His colleagues greeted him warmly:

Senators cheer colleague and stroke victim Mark Kirk as he reaches top of capitol steps on his return to work a year after a major stroke.

Very moving: Senator Kirk returning to the House after his stroke cheered on by all of his colleagues lining the capitol steps. #senatorkirk

Was great to see @VP Biden today and members of Congress welcome back @SenatorKirk to the #Senate. #Congress

I enjoyed seeing @SenatorKirk return to the capitol today. He has been missed, and I am grateful for his miraculous recovery.

And others wished him well:

Congratulations to @SenatorKirk on his return to the Senate. An inspiration to us all!

Welcome back to work, @SenatorKirk. You’re an inspiration. Keep it up!

Congrats to Sen. Mark Kirk (R-IL) on his return to work as his journey to recover from a stroke continues.

@SenatorKirk way to go!! You are an inspiration.

@SenatorKirk I was so moved by your progress and journey! Thank you for your service to Illinois.

Watching Sen. Mark Kirk (@SenatorKirk), who suffered a stroke last year, walk the steps of the #USCapitol is inspirational.

My friend, @SenatorKirk walked up the stairs to the Senate today with a little help from VP Biden and Sens. Manchin & Durbin #GreatJobMark

Welcome back, Sen. Mark Kirk. Taped interview w/ him after he scaled Capitol steps this morn. Can hear his poignant observations Fri. 5-9am.

I join to welcome @SenatorKirk back to the #US Senate. Each step he takes is an inspiration to us all. All of #IL is proud of you, Senator!

Indeed. Best wishes to you, Sen. Kirk, in your continued recovery.