In Drive to Unionize, Fast-Food Workers Walk Off the Job http://t.co/2x5FpDK2 #1u #p2 #fastfoodfwd

Fast food workers in New York City barely make enough to get by. Many of us make minimum wage — just $7.25 an hour, or as little as $11,000 a year. Meanwhile, the Goliath corporations we work for, like McDonalds, Wendy’s, Taco Bell, KFC, and Pizza Hut, are part of a $200 billion industry. These corporations reap huge profits and shower CEOs with exorbitant compensation while most of their employees qualify for food stamps.

Damn those greedy corporations that employ people! Good thing workers and strike advocates are giving those corporations what for. How better to lobby for more money for all the work you’re doing than by ceasing to work?

"We could lift an entire segment of the US population out of poverty and into middle class" How? STRIKE! http://t.co/XxAdOuQs #fastfoodfwd

In Canada, thousands of fast-food workers are organized by CAW Local 3000 and other unions. Why not America? @thenation @WeGotEd @edshow

It's a dance party outside Wendy's with #fastfoodfwd, Fulton Mall in Brooklyn.

Nothin’ gets the toes tappin’ like a strike, baby!

"Hey hey, ho ho, minimum wage has got to go!" outside Wendy's #fastfoodfwd

Unfortunately, doubling the minimum wage, as these workers are demanding, would put a strain on their employers and make hiring workers more difficult. Oh, and don’t forget about the chunk reserved for the Fast Food Workers Committee union dues. But, gee, that chant’s catchy!

Another worker just walked out at Wendy's to join the strike! #fastfoodfwd pic.twitter.com/0GTgQNYT 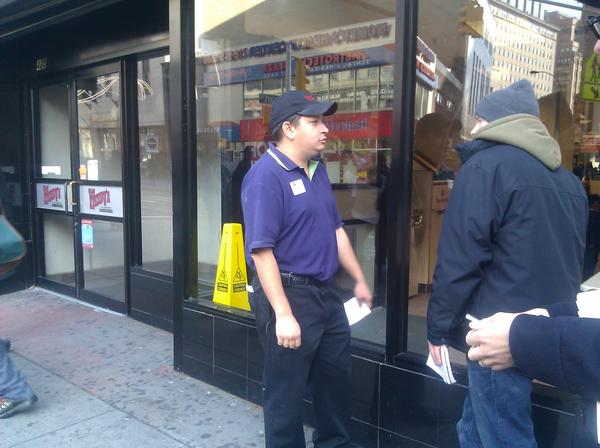 Mic checking workers telling why they're on strike. #fastfoodfwd http://t.co/ZsnNFZxm

"I'm calling the shots because I do the work!" I love this woman #fastfoodfwd pic.twitter.com/fTB0brgI 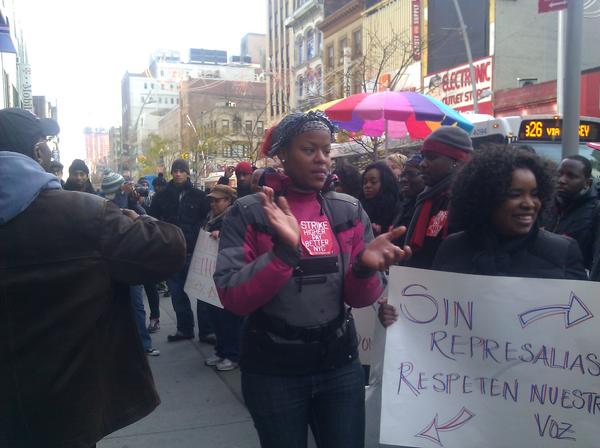 Strike for higher pay for a stronger NY! #fastfoodfwd http://t.co/SeNJb45G

These boots are made for walking (picket lines) #fastfoodfwd http://t.co/rnVY00PC

@HildaSolisDOL I bet the #fastfoodfwd workers would love to tell you their stories. Times Square, 4pm!

The picket line at Nostrand/ Fulton in Brooklyn. Around 30 ppl chanting "Stand up! Fight back!" #riseupny #fastfoodfwd pic.twitter.com/h2v7cHZL 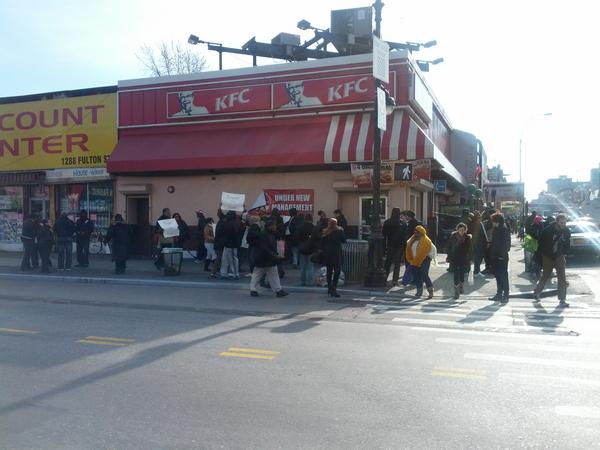 Heading to Times Sq McDonalds for #fastfoodfwd action. Out of the "restaurants", into the streets.

Unfortunately for the strikers, it looks like their nemeses are a few steps ahead when it comes to winning the social media game:

McDonalds and Walmart seem to be buying promoted Tweets on #fastfoodfwd hashtag. http://t.co/NXHw76xl