‘Did the FBI raid HER home’?! Damning, receipt-filled thread shows how Hillary Clinton not… 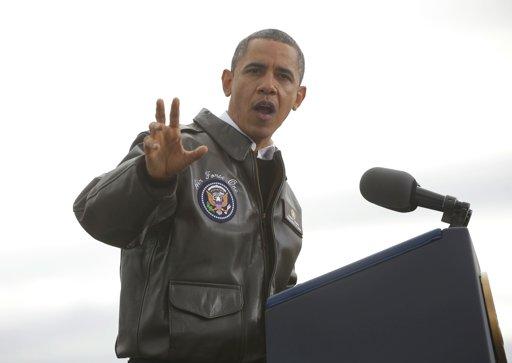 No doubt finding it increasingly difficult to be taken seriously, President Obama is trying to win the nation’s respect by donning a bomber jacket. But conservatives aren’t feeling the macho act:

@michellemalkin obama looks silly in that bomber jacket. All image. Zero substance. No wonder the shallow hollyweirdo crowd loves him ! ! !

**Hey @DanaMilbank remember when you freaked out about George Bush wearing a bomber jacket? Why so quiet now? http://t.co/Sl3dmxNR #tcot #p2

Staten Island is turning into a Mad Max movie while the press praises Obama for his bomber jacket show. #sandy #tcot

Don't fret Staten Island for #Obama will send you some swell pictures of him wearing a Bomber Jacker for you to chew on. #tcot #p2 #wiunion

Am I the only one who thought Obama's "bomber" jacket looked ridiculous? It was like kindergarten. He had his name badge glued on it.

As a person who earned the right to wear a Bomber Jacket (and doesn't) it makes my blood boil to see obama pretending to be CINC with one.

Obama in his "bomber" jacket; great Halloween costume. Maybe he has another in extra small for Bloomberg.

Obama wearing a bomber's jacket is so glib.I bet he has a letter jacket in his closet he didn't earn right by an unwarranted Nobel Prize.

Whoever told Obama to run across the Tarmac in a bomber jacket with #Bengahzi and #Sandy people denied help due to unions should be 5150ed.

It's a disgrace that Obama's wearing a Bomber Jacket w/ prez logo on it. Salt in the Seal's wounds. Can't wait until Tuesday!!

Love that 'The Obama' broke out the Bomber jacket for #Sandy & final campaign stretch, beats the feet pajamas he slept in during Benghazi

Was Obama wearing his cute tough-guy bomber jacket when Benghazi was under attack for all those hrs?

We’d go to the photo of Obama in the Benghazi situation room, but there isn’t one.

The Empty Suit is now the Empty Bomber Jacket. http://t.co/Phovnpbu

And the threads are unraveling.