Hoboken, New Jersey, has suffered immensely at the hands of Hurricane Sandy. Widespread flooding has left the city nearly unrecognizable, and 20,000 residents remain unable to leave:

Public Safety director Jon Tooke says at least 25 percent of the city on the Hudson River across from Manhattan remains under water. He estimates at least 20,000 people are stranded and says most are being encouraged to shelter in place until floodwaters recede.

#SuperstormSandy 20,000 out of 50,000 residents in Hoboken are still trapped in their homes by flood waters.

Hoboken’s road to recovery will be a long and arduous one:

Back in my office after two days trapped in a flooded building with no power. Hell of a mess in Hoboken.

Heading out to rescue #Hoboken friends -trapped by water till today. No electricity expected for at least 1 wk.

Man, Hoboken flooded out, huh? Feels weird considering I was wandering around there a few weeks ago. Hope those folks are ok.

Absolutely devastating to see my beautiful town in such a state. Weird things deposited all over the place. Big things. #hoboken

But hope is on the horizon:

@USNationalGuard thank you for rescuing my sister in #hoboken. 4th and Jackson. Trapped for 3 days with no power. #service #grateful

And residents are lifting each other up through the most difficult of times:

In Hoboken for the first time today-it's banged up,but it's very refreshing to see how many people are outside helping each other. #realtalk

This is what I like to see! Captured in Hoboken,NJ. When times get rough we only have each other! #Hurricane http://t.co/WcqqTUnO 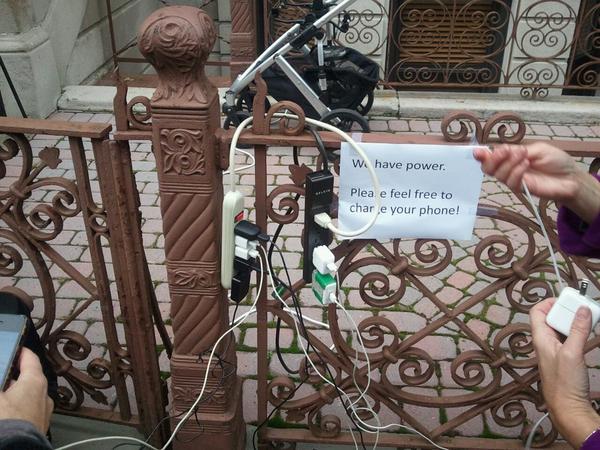 This little girl brought muffins to the National Guard HQ in Hoboken pic.twitter.com/VrnZzZsq

We extend our prayers to the residents of Hoboken. Stay safe, and may your city’s recovery be swift.