Natural disasters have a way of bring out the best in people — and the worst. Across the Muslim world, Hurricane Sandy was lauded as just punishment for American infidels and as a symbol of the power of Allah:

Hurricane of sandy created the name of Allah because of the way Americans humiliated our beloved Prophet (SAW). pic.twitter.com/n1NpkZOe 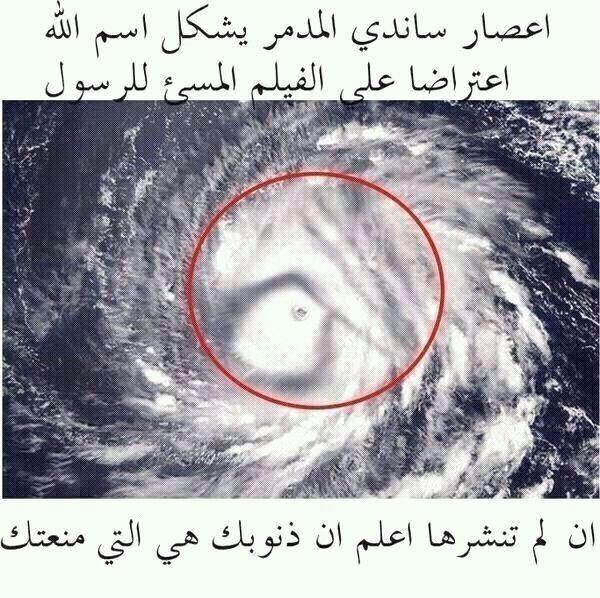 Hurricanes, floods and tornados are the soldiers of Allah which Allah releases against those he wishes to punish or to wake up Allahu Akbar!

When powerfull nations bully poor nations allah is watching he is the best off all planners.he watches to a certan extent then Sandy comes

Those who drop deaths for innocents 4m skies, today sky got violent on them. May Allah save all incnts & punish all culprits #HurricaneSandy

They confirm Sandy it's. Nothíng but punish from god .. now what they will say about Riyadh disaster

#sandy this is Allah's punishment to thse who make fun of his prophet. Americans should try to respect other countries And stop interfering!

Hurricane Sandy reminds us of the Power and Might of Allah.As He said in al-Qur'aan:

Verily, those who annoy Allah and His Messenger (Peace Be Upon Him)

Allah has cursed them in this world, and in the Hereafter, and has prepared for them a humiliating torment. [Quran 33:57]

Today it seems #God is #Allah and not #Jesus, like He is most of the time. #Sandy #karma #globalwarming

HURRICANE SANDY…trick or treat? America is too powerful for a land army… But read Quran & see how Allah SWT used weather to handle some

Hurricane Sandy is not only a punishment from Allah (swt).. it's also a sign of the Day of Judgement. #SubhanAllah

Several revelers attributed Sandy to revenge over “The Innocence of Muslims,” the film wrongly blamed for launching violent anti-American attacks in September, including the deadly attacks in Benghazi:

I wonder if Hurricane Sandy is a punishment from Allah for the movie about Prophet Muhanmad S.A.W ..Allah knows best

They made a blockbaster movie named 'Innocence Of Muslims' and, The Almighty Allah 'awarded' them by 'Hurricane Sandy'. #Proud

This Twitterer admits that innocent Americans are suffering yet celebrates the destruction and hopes for more:

The Saudi Grand Mufti, by contrast, denounced the sick gloating. His condemnation was shared by several other prominent Muslims:

Mustafa al-Nagar, Former Egyptian parliament member who was in the United States at the time of the storm, wrote on his Twitter account: “I pray for people here in America with mercy. What’s happening here is a catastrophe and a tragedy! Do not gloat over innocent victims, this is inhumane.”

Palestinian poet Mourid Barghouti also criticized gloaters over Sandy. He tweeted: “Who told you that children, students, women and men in America wish you [Muslims] death? Politicians like Mubarak and Bush are one thing, and humanity is something else.”

In the same vein, Engy Hamdi, political activist and member of Egypt’s April 6 Movement, wrote on her Twitter account, “Did Islam teach us to gloat amid the misfortunes of people?”

Others echoed this sentiment and expressed disgust at their fellow Muslims’ rejoicing:

How can you feel happy on #sandy pak ppl?How?We are suppose to fear Allah and say Astagfirullah on such disaster

Stop saying that "Hurricane Sandy is a punishment from Allah to the American people." That is not how Muslims are suppose to act.

And many tweeted out prayers for safety and healing:

Pray for my dad's safe journey to the East Coast of America, where the Sandy storm took place. May Allah bless us. Aamiin.

Extremely painful to hear about the hurricane sandy victims. My prayers n sympathies r with them. May allah help all of them.

Dear Allah..Save Our aunty and fams From " Hurricane Sandy "

May ALLAH help those who are affected by the cyclone sandy.

Wishing our best thoughts and duas to everyone affected by Hurricane Sandy. May Allah (swt) bring you relief and… http://t.co/MzA1f67h

Keep praying for all those ppl who happen to be on #Sandy's way when she hits part of the east cost..??? may Allah be with y'all ☝☝

May Allah save the people in New York #PrayForNewYork #Sandy

Massive Hurricane Sandy i pray ALLAH for mercy on all effected