President Biden tells Rep. Rashida Tlaib he admires her intellect and passion, is praying for her…

Boobs for the WIN! Gina Carano uses PERFECT meme to make a point about how much better red states are…

‘Is this good now?’ When can we expect the usual suspects to sound the…

Marika Shaub, MoveOn.org’s Director of Social Media Initiatives is, like, so proud of President Obama. You see, he really cares about the victims of Hurricane Sandy. Just look at this photo:

He looks all serious and everything! Takes a special caliber of leader to do that kind of intense “monitoring.” We all know that when it’s photo-op time, President Obama is really buckling down. Because he cares! George W. Bush would never reach out to people that way.

@marikatogo @barackobama you must be new here…

@OldGibsonND @marikatogo Donno. Either way, a photo-op does not equal leadership.

It doesn’t? B-b-but, if that’s true, then that means Obama’s not really much of a leader. That can’t be right! Think of all the things he’s promised to lead on.

@marikatogo @BarackObama "Okay, Mr. President, now would be a good time for you to make the oceans recede."

@marikatogo @MoveOn @BarackObama really Did he addrss nation frm oval office w-#Benghazi? NO wht did he do? Quick spch in gardn thn to vegas

Meanwhile, that heartless President Bush has never shown any concern for people in need:

@marikatogo Whatever you do, DON'T LOOK AT THIS PICTURE!!! pic.twitter.com/4Gb8gQC2 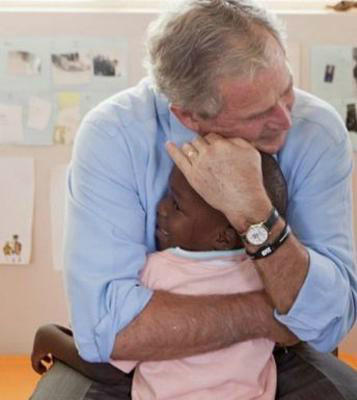 Marika is right: we wouldn’t have seen a photo of Bush like the one of Obama. Because Bush wasn’t content to sit on the sidelines and watch disaster unfold. It takes much more than a photo to demonstrate true leadership. After nearly four years in office, President Obama still hasn’t learned that lesson. America seeks leadership; come November, we’ll get it.