The lovely Ann Romney sat down this morning with the ladies of “The View” to discuss the election, women’s rights, the economy, and her family. Her husband had canceled his appearance on the talk show due to a scheduling conflict, but Barbara Walters told her that she was “a wonderful advocate” for Mitt. Barbara was exactly right — and Josh Romney agreed wholeheartedly with her assessment: 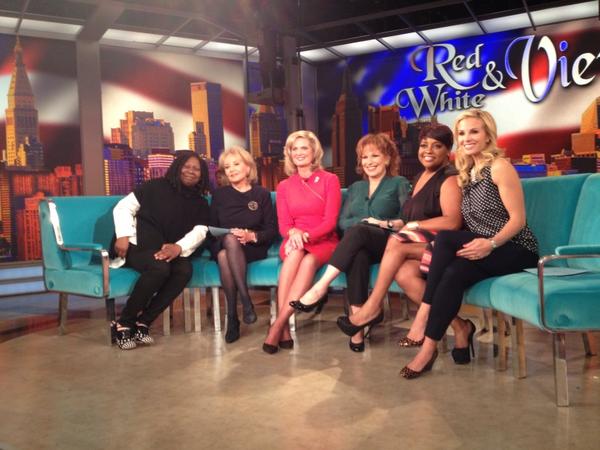 Throughout the interview, Romney was gracious, charming, and well-spoken.

She spoke lovingly of her family:

And she addressed the emotional toll the campaign season has taken on them all, telling her hosts that if her husband loses the election, the family is done with politics:

Ann Romney: Mitt 'absolutely' done with politics if he loses election on Nov. 6 (by @aliciacohn) http://t.co/grzGFnMp

Liberals delighted in the news:

That'd be a relief! | #AnnRomney Tells The View: Mitt Won't Run Again If He Loses http://t.co/6y9G4HvN

But if Ann Romney’s positivity is any indication, those liberals will soon be addressing her as First Lady.

Asked about issues confronting women today, Romney stressed the importance of a thriving, or at least improving, economy. She said that what she hears most from women is “help.” Women are fast losing faith in our strugging economy and in their ability to find and maintain employment. And polls show that women are looking for a leader who can get our economy back on track.

Joy Behar apparently didn’t grasp Romney’s message, and, desperate to somehow bring the conversation around to lady parts (they were discussing women’s issues after all), she bizarrely asked Romney if she believed that abortion and contraception access were economic issues. Romney, who also stated that she is proudly pro-life, was no doubt shocked by the utter stupidity of that question, but she kept a straight face and batted that ball away.

Ann Romney has class and guts.. Joy Behar has neither.

Whoopi Goldberg also took her turn with the dunce cap, questioning Romney about her husband’s and sons’ decisions to do missionary work rather than serve in the military. First, Goldberg asserted that military service goes against the Mormon faith, an assertion Romney swiftly corrected:

Sheeh RT @Chris_Moody: Whoopi to Ann Romney: I believe your religion does not allow you to go fight [in war.] Ann: No, that's not correct.

Whoopi just asked Ann Romney about her religions stance on serving in the #military and thought that Mormons didn't serve…EEK!

So ridiculous. "Whoopi Presses Ann Romney On Sons' Lack Of Military Service: Does Mormonism Not Allow It?" http://t.co/kUq50Glp

Romney defended her family’s missionary work, remarking that it is merely a different way of serving, and she expressed her utmost gratitude to our men and women in uniform. Whoopi, evidently stuck on stupid, wasn’t satisfied with that answer and went on to ask her how she’d be able to face mothers of deceased troops knowing that her sons didn’t serve in the military.

Whoopi Goldberg apparently thinks your child has to serve in the military to have compassion for those who do http://t.co/ym04U2Kq

Whoopi is trash. RT @HuffPostMedia: Wow—Whoopi asks Ann Romney how she can explain to mothers of killed soldiers that her sons didn't serve.

@theviewtvThe question Whoopi asked Ann Romney about deceased military was horrible. Did Obama serve in the military? Get real Whoopi!

Anyone catch Ann Romney on The View? She did well even though they tried to trip her up. BTW, Whoopi, BO didn't serve in the military either

Mrs. Romney is indeed a class act. Once again, she handled a despicable question beautifully. She said that consoling the mothers of the fallen is “probably the hardest thing that a president and a first lady” will ever have to do. She also remarked that Governor Romney attended every single military funeral during his term in office.

Ann Romney is so full of shit on The View… way to deflect , bitch.

I'm watching Ann Romney on The View, and not gonna lie.. she's a bitch ??

Watching the view and this dizzy bitch Ann Romney is dancing around every question they ask her just like her punk ass husband..TEAMOBAMA!!

Is anyone watching Ann Romney's awkward interview on The View? This woman is cold and privileged.

Watching Ann Romney on the View..the awkward silence & her constant studdering is distracting.

Ann Romney comes off as a bitch on The View.

She a Stupid ass prick ? “@FU_B_IMGOLDN: Fuck that bitch RT @_Keesh_Dior: Ann Romney is on the view”

Its not even funny how awkward ann romney is on the view right now. #trainwreck

Oh, it was a trainwreck all right. But not for Romney. While Joy and Whoopi crashed and burned, our future First Lady emerged from the rubble looking better than ever.

Love love the interview of Ann Romney on the view never watch the show. she is a class act will make an excellent first lady

Even the left-leaning Guardian had to admit that Ann knocked it out of the park:

Ann Romney goes where Mitt fears to tread and takes The View by storm http://t.co/Twvt4ycc – via @emmagkeller