Well, it was inevitable. Lefties have spent the last two days twisting themselves in intellectual knots trying to explain their Dear Leader’s miserable debate performance. Their excuses have run the gamut, from high altitude to women to loud noises to being confronted with the truth. Today, though, the big buzz was over a mysterious white material clutched by Romney at the debate. 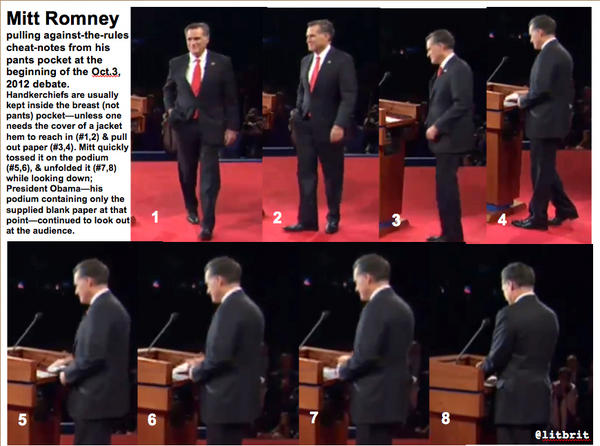 The speculation began yesterday at Democratic Underground. Some eagle-eyed genius noticed that when Romney walked on stage and up to the podium, he removed something white from his pocket. Lefty logic dictates that it could only have been one thing: a cheat sheet. That’s right, ladies and gentlemen: Romney didn’t win the debate on his merits; he won it because of a forbidden piece of paper. You see, candidates are not allowed to bring notes into debates.

Here’s the damning video, complete with a slow-motion sequence:

Did you see it? Are you scandalized? The liberal blogosphere certainly was.

The Daily Kos couldn’t wait to get a piece of the conspiracy action:

The author of that exposé thought the whole thing looked “hinky.”

You Be the Judge: Did Mitt Cheat? http://t.co/KnKOmfmD #cheatsheet

Romney spokeswoman says it was a handkerchief, Internet says secret #debates notes! You be the judge. http://t.co/4YcVXgh5 #hankygate

Wonkette hopped aboard as well:

Not to mention a heap of foaming-at-the-mouth liberal Twitterers:

Romney cheated in the debate by bringing a cheat sheet with him. That's expressly forbidden in the rules. http://t.co/GQaIdTvg (via @ddayen)

@WisdomSeeker18 @youtube Yes #Romney did cheat. I saw the video, saw him pull notes out of pocket & put on podium. #WhatCharacter

Sadly, as it turned out, the conspiratorial liberals were wrong. Mitt Romney’s “cheat sheet” was, in reality, a handkerchief. Foiled again!

Obviously Romney's handkerchief had his zingers embroidered into it. http://t.co/S1CZJ5K5

It is now suggested that (unlike Bush with his radio) Romney may NOT have cheated. "Notes" may have been a handkerchief http://t.co/GkEUdl33

Wonkette walked back its original claim — and qualified the walk-back, natch:

So we are now willing to stipulate that it is possible Mitt Romney is not a cheating cheater, in this one instance.

But he totally still could be.

Even the “real reporters” at The Week grudgingly agreed that the suspicious white article was most likely a handkerchief.

And at least a couple of liberals noted that the conspiracy was ridiculous:

obama lost the debate. romney didnt cheat. and even if he did obama lost. the unemployment change is real. nobody cooked the books.

So, Obama’s loss was still Romney’s fault, but not because Romney cheated. Oh well.

I love it when the left piles on and calls us "conspiracy theorists." They are the undisputed KINGS of ridiculous theories.

@BenHowe The latest kook theory….Romney cheated at the debate! Just like Bush did when he wore a wire at the debate in 04!

Let me get this straight: Obama looks at his beltbuckle all night and Romney is the one with the cheat sheet. Realy people? #headscratcher

So liberals are saying Romney used a cheat sheet against Obama, what's that say about Obama if a single sheet of paper can derail him That’s much more organized than what people are speculating Obama’s debate night notepad looked like: 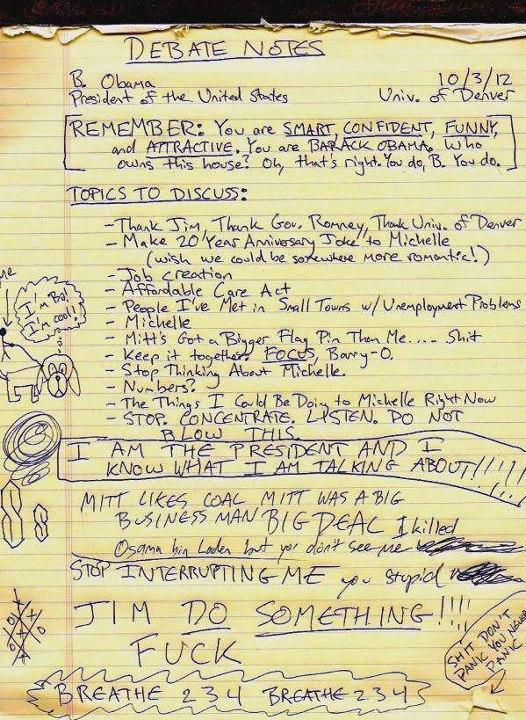 I really like how Romney cleverly wiped his nose with that cheat sheet to cover up his tracks. http://t.co/K2zxOhiW

One Twitterer pointed out how the Democrats could potentially learn from this experience:

For the VP debate, Ryan should spot Biden at least 10 handkerchiefs, just to make it fair.

That’s a win, right there.