Google and YouTube give $13.2 million to launch a new global fact-checking fund

President Obama, trembling under the weight of those pesky “constraints of governing,” hasn’t exactly expressed much interest in prepping for tomorrow night’s presidential debate. In fact, just yesterday, he was whining about having to stay inside to do his debate homework. A drag, indeed. Evidently, the all work and no play got to be too much for the dull boy, and he took a field trip to the Hoover Dam. 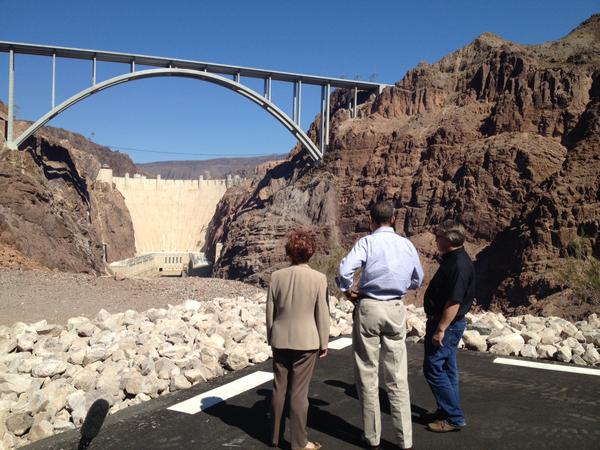 "Its spectacular and I've never seen it before," Pres Obama tells reporters about his visit to the Hoover Dam.

Pres Obama said an aide told him they were only 15 minutes away from Hoover Dam "and I said well we've got to go check it out."

Pres Obama was surprised to learn that most of the power generated at Hoover Dam goes to southern California & not to Las Vegas.

Obama's questions on 1st visit to Hoover Dam: Where does the power go? How long did it take to build? How many people were killed building?

During his visit, President Obama made it pretty clear that he did not want to discuss the debate:

But when reporters started asking about his debate preps, Pres Obama ended the chat and turned away.

Leading some to express concern that his priorities aren’t where they should be:

I love the Hoover Dam, but what is Obama doing sightseeing the day before the debate?

Esp. after reports he's underprepared RT @mollyesque: I love the Hoover Dam, but what is Obama doing sightseeing the day before the debate?

Conveying a sense of "I got this," presumably. MT @mollyesque: Love the Hoover Dam, but what is Obama doing sightseeing day before debate?

Some people also remarked on the similarity between today’s photo op and an MSNBC ad featuring Rachel Maddow at Hoover Dam:

OMG Rachel @maddow has been there RT @BuzzFeedAndrew: Obama at the Hoover Dam. via Reuters pic.twitter.com/VCFIrzD6

RT I see Obama and I hear @Maddow “@BuzzFeedAndrew: Obama at the Hoover Dam. via Reuters pic.twitter.com/1z2eAZOY”

RT @BuzzFeedAndrew: Obama at the Hoover Dam. via Reuters pic.twitter.com/Mf8Cmmqg // really looks like an MSNBC ad

It definitely does look familiar …

Given the president’s reluctance to even acknowledge tomorrow’s debate, it’s entirely possible that he’d rather be leaning forward than brushing up on his debating skills.