A bomb threat has been reported on the #LSU campus. Please evacuate the campus as calmly and quickly as possible.… http://t.co/26gWRU0r

Twitchy will continue to monitor this developing story and bring you updates.

According to the Shreveport Times, the evacuation began shortly after 11:30 this morning.

So, @lsu is evacuating more than 30,000 students + faculty + staff due to bomb threat. Nearly all of these people drive cars. Nightmare.

LSU is evacuating due to a bomb threat. Delays on the streets around campus mounting. Please avoid the area. 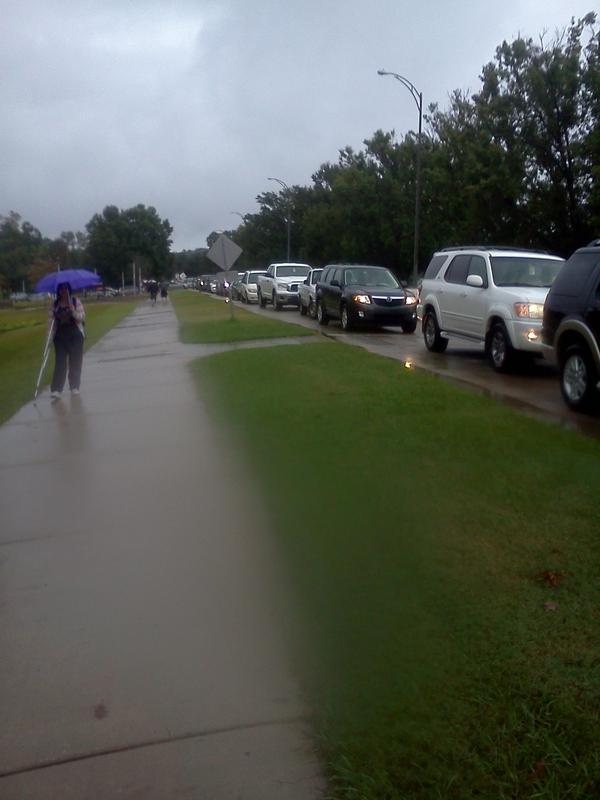 Avoid Dalrymple Dr. on #LSU campus. Total gridlock. Giving up on driving. Walking to get my kids from lab school.

Bomb technicians are at LSU:

State Police Captain Doug Cain said his office “immediately sent bomb technicians and bomb-sniffing dogs to search an area of the campus” where a caller said a bomb was located.

Also dispatched to the scene was the “Fusion Center,” a section composed of state and local police, national guard and homeland security personnel that establishes a communication link. Also, the federal Department of Homeland Security is involved.

Cain said the Fusion Center contacted similar sections in Texas, Ohio and North Dakota where similar bomb threats were made last week to determine if there are similarities.

All #LSU classes, events cancelled for today. Evacuation is still in effect. http://t.co/r0iF91Ri

LSU Police, with support from multiple law enforcement agencies, continues to investigate a bomb threat on the LSU campus. The evacuation of the LSU campus is still in effect. Campus buildings are currently being searched by LSU personnel with support of law enforcement. Buildings deemed ready to return to normal operations will be determined on a building-by-building basis.

LSU students reacted to the news:

a bomb threat was made at LSU now I can't attend my classes today. 🙁

Bomb threat @LSU. Classes are cancelled. I think we've had one week where everyday was normal. Hoping this threat isn't real. #crazysemester

Twitterers are experiencing déja vu and are once again praying for students’ safety:

Now LSU has a bomb threat. Geez people, stop with the craziness.

Oh my god is there really a bomb threat on LSU. Please no lord please.

WHAT THE SMOKE IS WITH ALL OF THESE BOMB THREATS?! Come on LSU. You're better than that!

Whats up with all these bomb threats? #LSU #NDSU #UT

prayers for students and faculty at #LSU

praying for LSU!!??? all these damn bomb threats..seriously people?

Everyone at LSU please be safe!

Hopefully all my family & friends are safe at LSU ??

Really hope nothing bad is happening on the LSU campus right now. These college campus scares are becoming too common.

Bomb threat on LSU campus ?! Really?! What has the world come to ?

A bomb threat at LSU too?! What is going on?? Who is doing this and why??

We may never find out, but we pray that it stops. Stay safe, LSU.