The incident occurred last night. GreenvilleOnline is reporting that the woman, Gloria Yvonne Brackett, was unaware that Gowdy is a U.S. Representative:

A 52-year-old Atlanta woman was charged on Sunday with pointing a gun at U.S. Rep. Trey Gowdy, a spokesman said.

A woman pointed a loaded pistol at the congressman while he was sitting in his car in the parking lot of Spartanburg First Baptist Church at 8:10 p.m., according warrants and the Spartanburg Department of Public Safety and an arrest warrant.

“We are certain that she does not know” he was a congressman,” said Spartanburg Public Safety Director A. Tony Fisher.

According to the report, 52-year-old Gloria Yvonne Brackett approached the freshman representative in a church parking lot. Brackett was holding a gun and told Gowdy to stop following her.

Gowdy had been waiting in his car to pick his daughter up after church. No shots were fired, and Rep. Gowdy left the scene unharmed. His spokesman released a statement:

@TGowdySC spox: "Mr Gowdy thanks police for their help & caring for his daughter. He will let criminal justice process take its course."

What do to have to do to get media out to #Spartanburg City Hall? Have some crazy lady point a gun at a congressman. pic.twitter.com/YswZHMZw 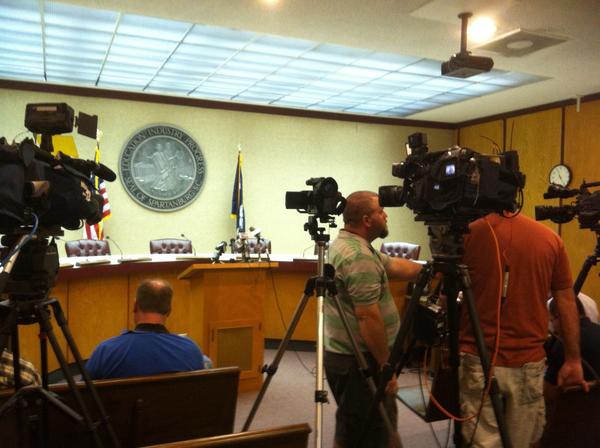 Gowdy came directly to Public Safety after the incident. Woman had a CZ .32 Caliber pistol, is a native of Cowpens.

Director Fisher: coordinating with solicitor to see if additional charges will be filed.

Woman is currently resident of Atlanta. Not sure if she knew that Gowdy is a congressman.

Director Fisher: will be evaluating woman’s mental health over the next few days. Suspect was on foot, had been dropped off at bus station.

Suspect wandered over to church parking lot after deciding not to take bus back to Atlanta.

Director Fisher: Public Safety has no information that suspect knew who Congressman Gowdy was.

Predictably, a few people used the opportunity to turn the incident into a call for more gun control:

No one wants gun control…until someone has a gun to YOUR head, ain't that right Congressman Gowdy, (R) SC?

Maybe she was just standing her ground? "GOP Congressman Threatened At Gunpoint" http://t.co/AXFcbgj4

Meanwhile, we’re grateful that Rep. Gowdy and his daughter are safe.

Who knew he was capable of shame? John Brennan feels ‘increasingly embarrassed to be a white male these days’ [video]

There’s a photo to go with the ‘unsettling encounter’ a woman alleges she had with Gov. Andrew Cuomo at a wedding