Details are still a little fuzzy, Fox 31 News is reporting that this morning, this morning, two armed men entered a Denver Radio Shack and took another man hostage.

Weirdness in Denver this morning. Two gunmen are holding a hostage in a Radio Shack on Colfax. Several public schools are on lockdown.

OMG- something LOUD is happening in Denver on Colfax.Bombs and gunfire at a Radio shack

The hostage has been identified as Chris Nimerfroh, a single father and manager of the store. One of the suspected gunmen has been posting messages and photos to his Facebook account from inside the store.

According to Fox 31, that suspect is 19 years old, has a daughter, and had a friend who was recently shot and killed by police in Aurora, a Denver suburb.

Fox 31 has also posted some of what has been transmitted over the police scanners:

No injuries have been reported so far. Twitchy will continue to monitor this story and bring you updates as it develops.

The Denver Post is reporting that nearby businesses have been evacuated.

Additionally, a Fox 31 has spoken with Ernest Watson, a friend of one of the suspects:

Watson said there are actually two suspects inside the building. The other male is 20 years old. He said the two were attempting to rob the Payday Loans stores next door and not the Radio Shack.

When police arrived, Watson said the two suspects fired at officers, grabbed a hostage and retreated inside the Radio Shack.

Watson spoke with Hayden right after he finished assisting police. He said the two suspects have no demands. He said he also thinks they have no plans to give up. “They know they’re either going to jail forever or that the police are going to shoot them,” Watson said.

Police have also cut off cellphone and Facebook access for the suspect who had been posting photos and messages earlier.

“We are continuing to monitor the situation just like everyone else, we are watching it live. We pray for the safety of everyone involved.”

Nimerfroh is apparently a member of Victory Church in Denver. Victory sent out this tweet:

One of our own is the hostage in the #radioshack #standoff in Denver. Please pray for peaceful resolution and his safety!

Denver-area residents and others took to Twitter to express their fear and concern:

“@Chelsea_Vicious: There's people being held hostage at the Radio Shack in Denver on colfax?! Omg.” my girl works right by it!

"@Chelsea_Vicious: There's people being held hostage at the Radio Shack in Denver on colfax?! Omg." what? omg

Since the senseless movie theater shooting in Aurora this past July, followed by the violence at the Wisconsin Sikh temple and the Family Research Council, citizens in Colorado and beyond have been particularly sensitive to the specter of shootings:

A few people couldn’t pass up the opportunity to showcase their thoughtlessness and stupidity:

They had customers?!?! RT @ProducerMatthew: Just in: Reports of shots fired, hostages being held at Denver-area Radio Shack

Someone is pissed that they are out of diodes. "@BuzzFeed: HOSTAGE SITUATION AT DENVER RADIO SHACK – LIVE VIDEO: http://t.co/LgEpZQGu"

All part of Radio Shack's PR campaign: We Still Exist! "@amaeryllis: BREAKING: Denver Police are responding to a standoff at Radio Shack"

But many Twitterers are offering up prayers:

Lord I pray for a hostage situation in Denver right now!! Please keep everyone safe Lord and cause guns to stop shooting!#GodsPrayerRoom

I pray for the safety of all hostages and police officers in Denver right now Lord. #GodsPrayerRoom

Lord I pray right now for your hand of healing to be on the victims injured in the Raido Shack takeover in Denver. #GodsPrayerRoom

The hostage in the #radioshack #standoff in Denver is Chris Nimerfroh, part of the @VictoryDenver family. Please pray for him! 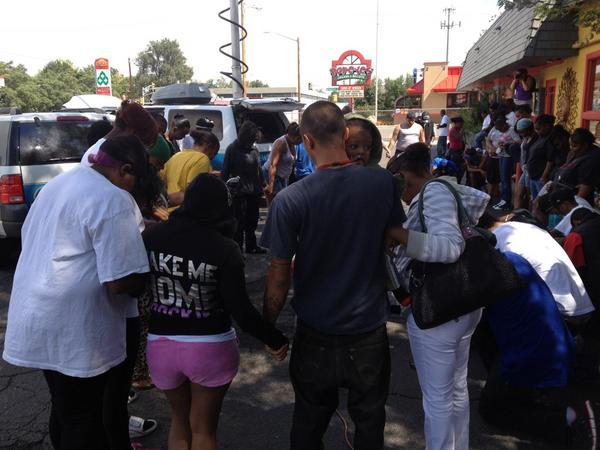 A live stream of the coverage is available here.

Our thoughts are with Mr. Nimerfroh and his loved ones.

Just in: Appears someone has been taken into custody from the Denver, Colorado Radio Shack hostage situation.

Video from KMGH-TV shows law enforcement were able to gain entry into the Radio Shack store in Denver, Colorado.

KUSA reporting at least one suspect and the hostage have been removed from the Radio Shack store in Denver, Colorado.

RadioShack has released a statement following conclusion of the #RadioShackStandoff http://t.co/iInMmqqd

We’re relieved that police could resolve the situation peacefully and we’re grateful for their swift and professional response. We’ll continue to support the police investigation as it is expected to be ongoing. We’re offering our prayers to all of the families involved.

Nimerfroh and both suspects are in police custody. Thankfully, no one was hurt.

‘What I did is tell my people the TRUTH’: Gov. Kristi Noem DROPS Dr. Fauci for accusing her of ignoring medical advice and it’s GLORIOUS (watch)