‘Such a good question!’ Jen Psaki praises reporter who asked if President Biden will keep…

‘THIS IS THE ANSWER’: Megyn Kelly on board with new coalition to fight critical race theory…

‘We don’t want Biden — We want revenge!’ Surprise: Antifa, which is just an idea…

‘Have you gone insane?’ Richard Grenell says ‘we must not do what the other side did…

So, Dems and media? WaPo’s Karen Attiah demands accountability from the people who misled…

‘I question the timing’: Amazon congratulates Biden, offers to help with vaccine…

Now that Joe Biden is president, Chelsea Handler can finally get something off her chest [video]

Oh boy. Bucket List Barack is at it again, singing his own praises louder than anyone else.

The latest report from the National Federation of Independent Business shows a drop in optimism to the lowest level in eight months among small-business owners, and the inclination to hire falling even further.

Given that even Obama acknowledges that the engine of job creation is small business, one might think that a President who needs to start seeing better jobs reports ASAP would try to reduce the fiscal and regulatory burdens that these entrepreneurs face rather than escalate them.  Unfortunately, Obama seems more inclined to play class-warfare games than to get job creation back on track — and these small business owners know it.

Twitterers were not about to let the Egomaniac in chief get away with such shamelessness:

@BarackObama So why do you try to distory them?

@BarackObama So you're planning on raising taxes on successful businesses filing as S-corps? How does that help?

@BarackObama free enterprises and not the government

Now that Obama has proudly proclaimed that he’s the one behind the wheel of our economy, does this mean he’ll finally claim responsibility for all of the damage he’s done? Fat chance.

@BarackObama if you meant "driving it into the ground at breakneck speed" you're absolutely right ! #fireObama 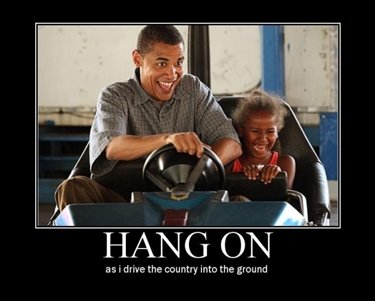 John Brennan: Intelligence community ‘moving in laser-like fashion’ to flush out fascists and ‘even libertarians’

CNN and Oliver Darcy declared the biggest message from the Biden inaugural was not ‘Unity’ but…fireworks??