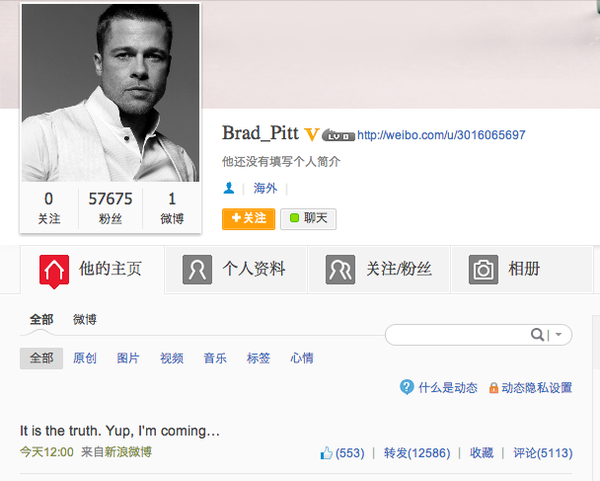 Actor Brad Pitt has reportedly been banned from China for his role in Seven Years in Tibet, but according to his new, verified account on Weibo (China’s version of Twitter), he may be visiting the communist country soon. Twitter is abuzz with amateur decoders trying to decipher the cryptic first tweet:

Brad Pitt now has a Weibo account. First post is "It is the truth. Yup, I'm coming…" can he? Thought he was banned after 7 Years in Tibet…

What does Brad Pitt mean when he says he's 'coming' on his Chinese twitter Sina Weibo account?

Are we sure he's not in bed with Angelina? MT @STcom Brad Pitt tweets to Chinese on his Sina Weibo that he's coming http://t.co/pUOWnYav

Radio host explains why it’s OK to go after Sen. Ted Cruz and his teen daughter after she was rushed to hospital