The DoD's FIRST float in the Tournament of Roses parade debuts. "Freedom Is Not Free" will honor Korean War Veterans.http://t.co/H7e2FJDv

Here’s a pic of the Korean War vets’ float: 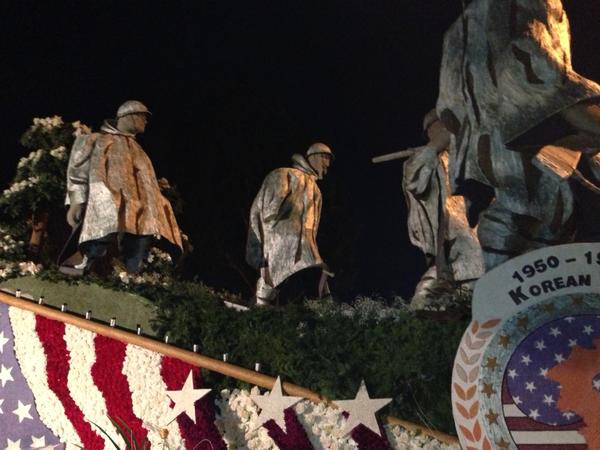 And more on the military service dogs’ float:

If anyone wants to DVR the potion of the Rose Parade with the Military Service Dog float and mute the insane announcers, I'd be much obliged

It’s been nine months since Lucca lost her paw to a roadside bomb in Afghanistan. A veteran of three combat deployments, she is one of thousands of U.S. military working dogs trained to sniff out booby traps, deliver messages and track enemies. She has led more than 200 missions, with no Marine ever injured under her patrol.

When the 124th Rose Parade kicks off the new year on Tuesday, Lucca and her handlers will be riding a float celebrating the decades of service by her kind. The float, titled “Canines with Courage” and sponsored by Natural Balance Pet Foods, was inspired by the Military Working Dog Teams National Monument that will be dedicated later next year in San Antonio.

Four handlers and their dogs, representing the Air Force, Army and Marines, will also escort the float, built by Fiesta Parade Floats.

God bless all our troops and their support staff and service animals this New Year’s Day!