Gov. Gavin Newsom says parts of Calif. resemble a ‘third-world country’ (but nobody in…

The anti-military, anti-Semitic, anti-gay, anti-American “church” of Westboro ghouls plans to exploit the Newtown, Conn. massacre the same way they planned to exploit the Aurora theater shootings. The despicable Phelps family has been tweeting its evil message all weekend:

And we'll tell you those kids died for fag marriage.#StopMarryingFags MT @Salon: Contact Westboro about picket at #SandyHook public mem.

As Twitchy reported in July, the Westboro cowards failed to show up in Colorado after making a media splash announcing their intentions.

If they are wise, the evil Westboro vultures will stay away this time, too. If not, good-hearted citizens are prepared to form another human walls like they have before at Texas A&M to protect Westboro targets.

The Westboro Baptist Church said they will be @ the Newtown funerals. A human wall needs to be formed protecting the families. #justlikeAM

westboro is going to newtown? we should do it up texas a&m style and go form a human wall so these families don't have to see them.

Actress Patricia Arquette hopes the media will refuse to give Westboro oxygen:

We demand media not cover Westboro picket of CT.Out of respect to families dont give those vultures the attention they CRAVE.

But as Twitchy has sadly pointed out, the media vultures themselves have exercised little restraint. See:  Gross: Media vultures now interrupting grieving Newtown residents at church.

@dailyclerk agreed. Its like swarms land. And canabalize the communities in mouning. I wont watch coverage.

In the meantime, the Anonymous gang targeted Westboro and hacked the group’s website:

Westboro will picket Newtown School, it's up to you to shut them down.

Summary: Never taunt Anonymous and dare them to fuck with you. | pic.twitter.com/CEBsykS0 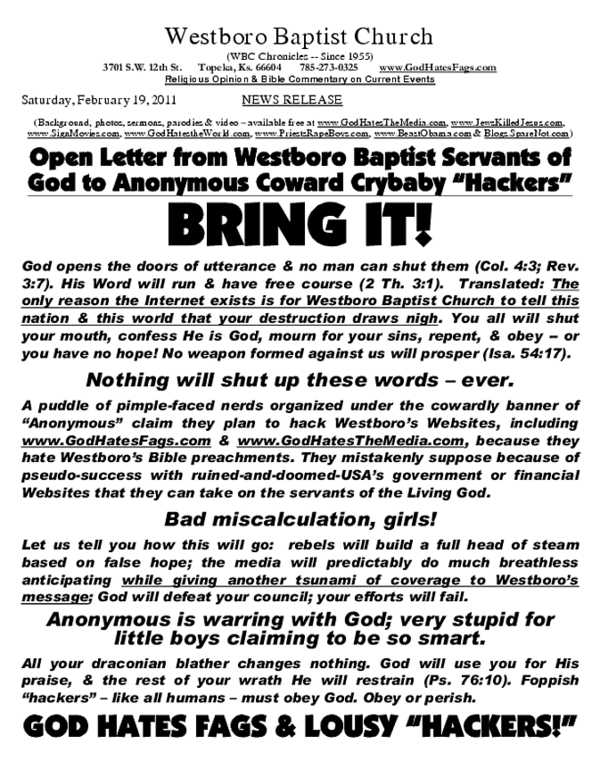 Not everyone is comfortable with Anonymous tactics:

This is a *big* moral dilemma: Anonymous have hacked and posted personal details of the Westboro Baptist Church people http://t.co/1SzHrQhY

But this much is clear:  Twitter users from the left, right, and center are united in revulsion against the Westboro cretins.

Westboro Baptist Church taunted Anonymous and got their asses handed to them this morning by getting hacked. I can’t stop laughing.

If Westboro was really hacked, they deserve it, as a Christian I can't believe they protest people who died saying God hates them.

Hating the Westboro Church is one thing that unites Americans. Literally everyone hates them