The violent movie “Gangster Squad,” starring Josh Brolin, Ryan Gosling, and Sean Penn, was delayed this summer because of the Aurora movie theater shooting. The directors edited out a grisly scene in which the film’s actors shot up a movie theater in an eery echo of the real-life Aurora massacre. The movie is now scheduled to debut next month and ads have been running on television. Today, viewers saw a commercial for the bloody flick during the Colts-Texans game and questioned the timing in the wake of the Newtown, Conn. school massacre:

Watching #NFL on Fox & wht movie is being promoted: GANGSTER SQUAD complete with Big Guns & all.. Glorify violence much Hollywood?

Just saw commercial for new movie #Gangster Squad and we wonder about our country's fascination with violence. #guns

Gangster Squad also has a lot guns. Why are they showing these ads this weekend?

In this E Online interview, Brolin and the movie’s director defended the gratuitous violence and deflected any responsibility for influencing real-life events.

The movie theater sequence was cut from the film, the film’s release date was postponed and the scene was moved to the streets of Chinatown during reshoots.

“I’m proud of the fact that we did that and I think that we didn’t compromise the film,” Fleisher told reporters. “I think that we should all respect the tragedy and not draw associations to our film as a result of any of these types of tragedies.”

Plus, as Ruben himself says, this is a movie about heroes, not villains. “I think this movie is about people who are standing up for their beliefs,” he said. “And trying to do what’s right.”

And yet, peaceful Tea Party activists are blamed for every random act of violence because they have stood up for their beliefs.

@MMFlint -you only focus on guns but need to look at Hollywood movies & tv violence which has harmed our kids.Your industry is about money.

@BlackDove3 And when Hollywood glorifies too! New Tarantino movie with massive gunshots, but Quentin calls for ban on guns? #confused

There should be mobs on Quentin Taratino's lawn and the lawns of the other Hollywood elite who glorify guns and mass killing in their films. 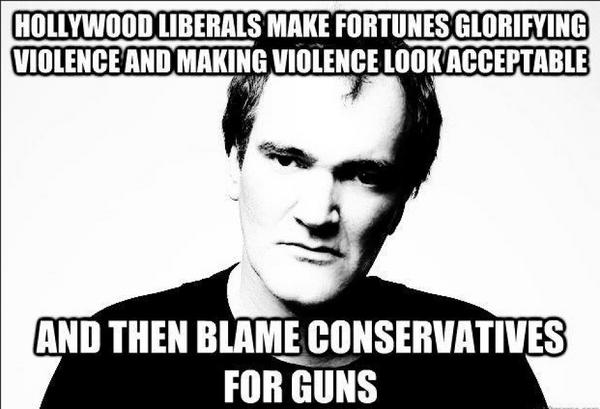