It’s SO ON: Elon Musk calls down the THUNDER on Apple for threatening to remove Twitter from App…

Matt Drudge links to a report from Madrid’s ABC.es that longtime Venezuelan dictator Hugo Chavez may be ousted in today’s presidential vote. The agency reports that exit polling shows challenger Henrique Capriles leading Chavez by a three-point margin of 51.3% to 48.06%.

The mood in Venezuela is reportedly tense, as people wait to see whether Chavez’s grip on power has finally been released:

Tension overwhelms #Venezuela tonight as votes are counted… #ComiendoUñas, or "Biting my nails" is trending #7O

Today’s election is being closely watched in Congress. Representative Ileana Ros-Lehtinen, chairman of the House Committee on Foreign Affairs,  tweeted about an interview she gave regarding the vote:

Did interview w/Channel 4 on today's #Venezuela elections + why it matters to US! http://t.co/MVxW1Lbv

And members of Congress aren’t the only U.S. residents paying close attention. Today’s vote has brought many Venezuelans living in the U.S. to the polls:

If Chavez is finally beaten, there’ll be no one sadder than his liberal buddies in Hollywood.

Penn and Glover were brave to go to a dangerous place like Venezuela to campaign for Chavez, while Chavez fan Kevin Spacey apparently wasn’t able to make it. Of course, it’s worth noting that it’s been much more dangerous to oppose Chavez than to support him:

2 shot to death when loyalists of Chavez, Capriles face off on a road in Barinas http://t.co/AshiaSd1 #Venezuela

Was the election clean? Well, just a few weeks ago, none other than former U.S. President Jimmuh Carter reported the Venezuelan electoral process to be “the best in the world” — definitely better than  the corrupt system in the United States. Today Carter’s eating crow, as his own Carter Center reported that Chavez is cheating:

Don’t sweat it Mr. President; your reputation won’t get much worse just because you looked silly one more time.

Chavez says that if he winds up going down to defeat, he will respect the results of the election:

Hopefully he’ll get the chance to make good on that promise.

Former Assistant Secretary of State for Western Hemisphere Affairs Roger Noreiga recently noted that Chavez has not looked good as he has campaigned while fighting cancer:

Is it too much to hope that if Chavez does end up in involuntary retirement, his preferred candidate for President of the U.S. gets beaten as well?

According to Venezuela’s Electoral Council, Chavez has won (via AP/Drudge):

National Electoral Council president Tibisay Lucena says that with most votes counted, Chavez had about 54 percent of the vote.

Chavez tweets: “Thank you my God, thank you everyone!”

"Thank you my God, thank you everyone!" tweets Chávez. RT @chavezcandangaGracias Dios mío! Gracias a todos y a todas!!

Not everyone is convinced that this was a fair election:

Hugo Chavez wins "re-election." I call bullshit on that

Tanks in the streets: 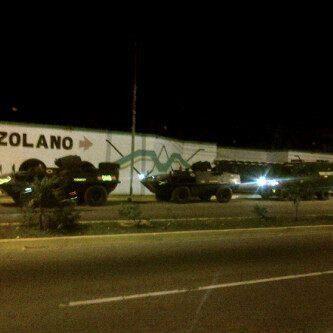