‘I literally do not know, I’m a media reporter.’ Brian Stelter admits the quiet part…

BACKFIRE detected! Compare John Oliver’s SCOTUS triggering to what he said about Trump a few years…

You hate to see it: David Hogg awkwardly apologizes for exposing his own racism despite his best woke…

Don’t be like DICK: Brit Hume drops Dick Blumenthal for refusing to meet with ACB and it just…

Now that we know even MORE about NYT’s story on Trump’s tax return, @PATreasury might want…

‘LOL, no.’ WaPo hot take concludes that if the election ends up at the Supreme Court, one…

Howard Fineman wishes Sen. Al Franken were still around to ‘carve up Coney Barrett’ instead…

In case the press didn’t break the oh-so-exciting news fast enough, there was a flyer letting everyone know that President Obama would be attending church today. Yes, really. A flyer.

There was a flyer advertising the Obamas' appearance at @MetropolitanAME today ==> http://t.co/uXnuRX4G

My family…. And President Obama's family came to meet with Jesus this morning!!!

Twice! He went to this church twice. No wonder all the squeeing. Look, guys! He’s totally churchy and stuff.

Pres Obama has worshipped at Metropolitan AME Church once before in 2011 on the occasion of the Martin Luther King Jr. Birthday.

I woke up to worship with The Lord at Metropolitan AME Church, and I JUST found out that President Barack Obama will be here today

My family…. And President Obama's family came to meet with Jesus this morning!!!

#Obama at my church. #hyped http://t.co/sv3pvxcO

#Obama at my church. #hyped

Obama, his arm around Michelle's waist, joins church crowd in singing Happy Birthday to his wife

President Obama and his family attend church ahead of swearing in – @TPMLiveWire http://t.co/q81aDjP5

Catch some of the church service the President is attending. http://t.co/iOaAtTov
litan-ame-church/

Obama is attending church at Metropolitan AME Church – the same place the funerals of Fredrick Douglas and Rosa Parks were held.

The President and first family are attending services this morning at DC's historic Metropolitan AME Church.

Did he mention the funerals?!

Ahead of swearing-in, Obama worships at African Methodist church: http://t.co/NUMBW66b

From the balcony to the basement Metropolitan AME is already full in anticipation of the first family's arrival pic.twitter.com/iCzyhbLG 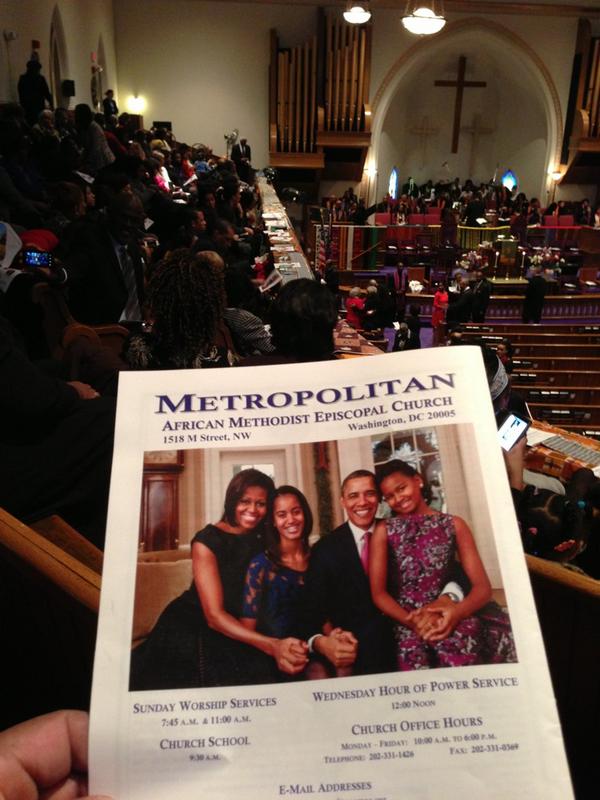 As the mass choir sang "I never lost my faith," President Obama and his family arrived at Metropolitan African Methodist Episcopal Church.

Shorter Sunday morning: The MSM wants you to know that Obama is in church.

@seanagnew photo from @pbsgwen | I bet Obama wasn't late to church like he is for nearly every presser #inauguration pic.twitter.com/FwiqYeUN 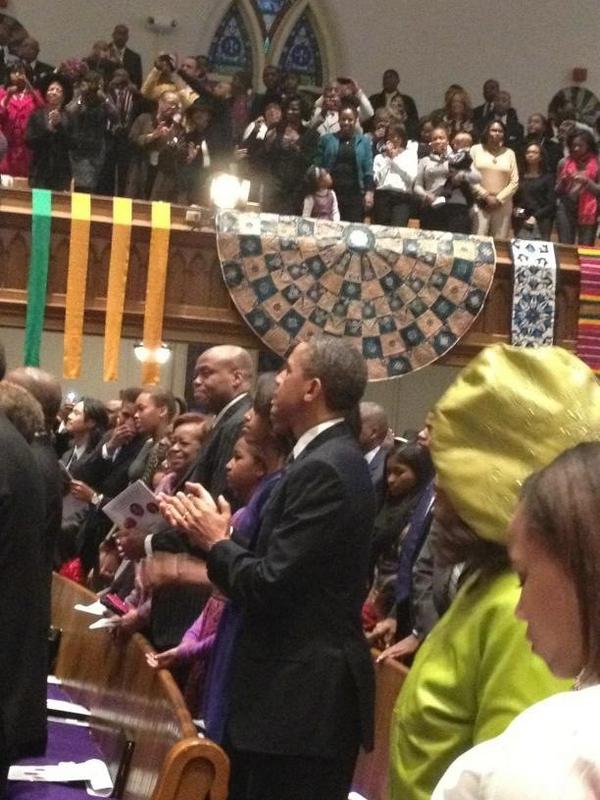 “@michellemalkin: It's the 2nd time Obama has worshipped at Metropolitan AME, according to CBS News =he "worshipped"? Or made a politic show

Don’t expect members of the media to ask anything like that. They are far too busy swooning over President Photo Op.