Killer boobs? Was she wearing a high-capacity magazine bra? Or “magazine clips,” as President Obama would say. A woman in Washington state recently smothered her boyfriend with her killer rack, in a drunken brawl, reportedly.

Killer boobs: Her curves are deadly.A Washington state woman smothered her boyfriend with her breasts when she threw herself on top o… 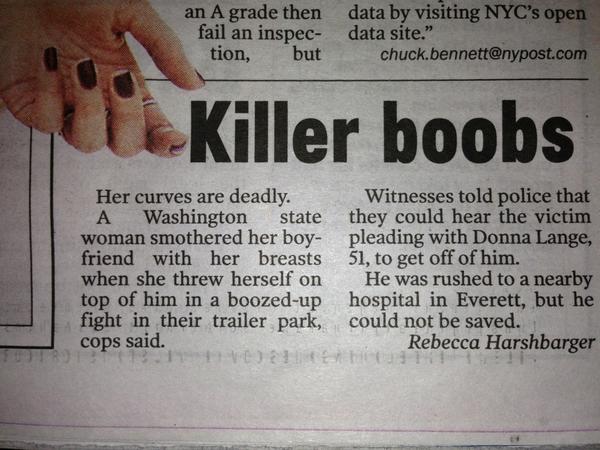 Twitter was buzzing with the boob-y news. Is it time for a waiting period for bazongas?

I don't write the news. I just tweet them. Talk about killer boobs. Woman allegedly smothers boyfriend with breasts http://t.co/Dsj0FUL4

Otherwise known as a fatal case of motorboating: http://t.co/d2klTItj

Simple motorboating, or something more sinister?

Others rally to ban these deadly assault breasts, which seem to be increasingly falling into the wrong hands.

Time to ban Assault Breast!!!!!Woman, Accused Of Using Her Breasts To Smother And Kill Boyfriend http://t.co/Aa8snQ4x via @HuffPostCrime

It’s an epidemic; it is happening in Germany, too!

Woman, 51, 'smothers lover to death with her breasts during drunken row in carava… #MailOnline http://t.co/GGOxOwyX pic.twitter.com/OuT2ugz7

@piersmorgan a man was recently smothered to death by his girlfriends breasts. Should we outlaw assault breasts?

Don’t hold your breath for an answer from Piers. It takes him hours and hours to come up with rejoinders. Plus, he’s far too busy madly crumpling paper in a fit of hissy. Oh, no! That’s ammunition: You can stuff bras with that.