Sheesh they are opening up tents for people with the flu? WTF?!

The #flu is apparently so rampant in Penn. that they have had to start setting up tents at hospital. Not a good sign. #influenza

The flu is so bad in Pennsylvania that hospitals are having to setup tents for the ER flu patients. pic.twitter.com/nvyUZDRN

Pennsylvania’s Lehigh Valley Hospital-Cedar Crest has set up tents for patients with flu-like symptoms, as the flu continues to spread.

The State Department of Health reports that four Pennsylvanians have already died of complications from the influenza virus.

In response to the early start of flu season, the Lehigh Valley Hospital-Cedar Crest had to open an emergency space to care for the increased number of people with flu-like symptoms.

Good morning! We are outside of Lehigh Valley Hospital where a tent is set up outside the ER for an influx of flu patients. 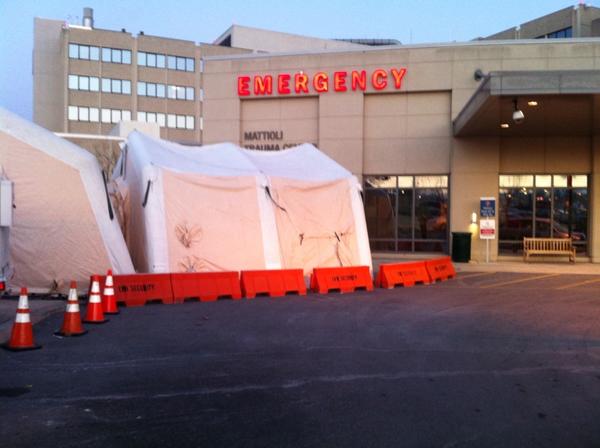 @WSJLive So true, it doesn't look good. Some places are setting up tents. #flu

I would b so not happy if my work assignment for the day was the flu tent outside.

Not surprised. 50 kids out yesterday in just one of our elementary schools/ Hospital Opens Emergency Tent http://t.co/f5VJUF71 #sgp

Some Twitter users try to deal with the scare with some snark.

Wow! This year's flu strain is gettin crae! Callin for private outside tent quarantines. Lol I feel #Contagion comin on. Got my sanitizer!

There's tents for people with the flu (like me). Crap. Has anyone seen Randall Flagg around? http://t.co/l3pnGnEj #TheStand

Flu epidemic…. Hospitals add extra tents outside and I think one thing…..zombie apocalypse…

The flu season started early this year and more such tents could spring up across the country. We hope the flu does not continue to spread so quickly and that does not become necessary. As always, Twitchy will continue to monitor this story.