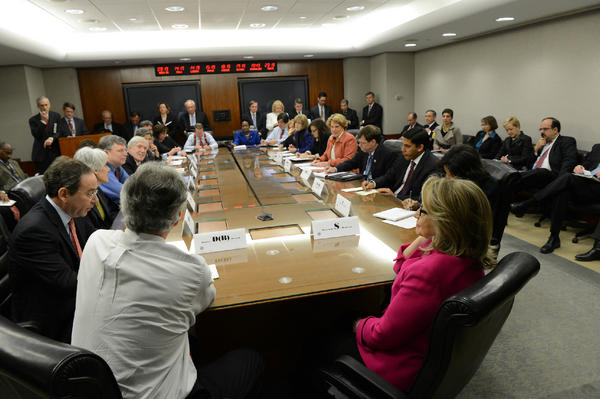 But, what will members of the media do now that they have to focus on Secretary Clinton’s accountability rather than breathlessly shriek over meany pants Republicans and Concussion-gate? Poor dears! Twitter users continue to do the job the media won’t do. Never mind the pictures … what about Benghazi?

Good morning, Hillary Clinton. Glad to see you feeling better! Give yourself a few hours to catch up on briefings/email, then… #Benghazi

Welcome back, Hillary! Now about Behngazi…Clinton returns to work http://t.co/WJGEjwBM

Welcome back to work Hillary! There's some folks who would like to talk to you about Benghazi.

I feel better already. Hillary Clinton is back at work. #not #tcot

WARN ALL AMBASSADORS #hewitt -> RT @remember1787: I feel better already. Hillary Clinton is back at work. #not #tcot

Your move, lapdogs. If you can tear your eyes away from the purty picture, natch.

By the way, where is the diversity?!

If President Obama has anything to do with it, that won’t change.