Something fundamental has to change? Like that pesky Constitution?

Obama on guns: "Something fundamental has to change." I think that's code for "We're going after the Constitution."

President Obama had a busy morning during an interview on “Meet the Press”: He blamed the death of four Americans in Benghazi on “sloppiness,” and called democracy “messy.” But that wasn’t all! He also did some ghoulish politicizing of the Newtown tragedy. Lapdog David Gregory provides the swoon-filled commentary.

After Newtown, POTUS says “all of us have to do some soul searching, including me as president” #MTP

New Gun Regulation laws: “I’d like to get it done in the first year” and “this is not something I will be putting off” #MTP

Obama on #Newtown tragedy to @davidgregory: “that was the worst day of my presidency” #MTP

But he’ll totally still politicize on the backs of the dead for an agenda! Shameful.

When Obama says in the #MTP interview "something fundamental has to change" re guns…well, that doesn't sound like tweaking, does it?

Obam say gun control is "not something I will be putting off." http://t.co/vMUnqMxI

Obama how do you propose to control an insane person/criminal from stealing/obtaining a gun and committing mass murder. STOP THE RHETORIC!

Because gun control works so well in Chicago… http://t.co/6kImVfm3 via @foxnewspolitics

So @BarackObama feels that I am not responsible enough to protect my family but yet he has 24hr protection for his. http://t.co/7MCaZigP

He is a fool if he thinks more laws restricting the rights of legal owners is going to solve any problem of of… http://t.co/zHqRgBGO

Obama hopes to enact new gun-control measures in 2013 – The Hill's Blog Briefing Room http://t.co/HByIm97s, your rights do not come from DC!

WTH: OBAMA is RESPONSIBLE for giving GUNS to the MEXICAN DRUG CARTELS & he wants to LECTURE ME about my GUN RIGHTS? pic.twitter.com/Ow36g2yB 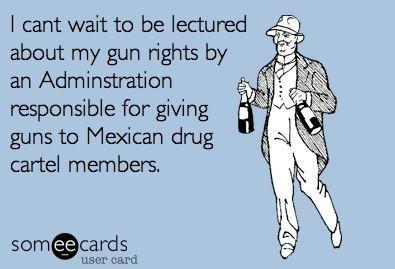 RT @chucktodd: On #mtp, POTUS signals that his push for guns will be driven by public opinion. If support isn't there, nothing happens

Gutsy call! And this Twitter user isn’t worried about his Second Amendment rights at all.

It won’t be for lack of trying, though. Remember: Fundamental change.