‘It’s over’: Chuck Schumer’s last-ditch effort to talk GOPers out of final…

OMG WE’RE ALL DEAD! Is it our imagination or did Kamala Harris just quote Biden on the MILLIONS of…

Holy WOW! National Daily Black Likely Voter Job Approval numbers for Trump over the past 5 days OFF THE…

Far too often, Twitter shows the darkest side of humanity, rife with venomous hate. Today, it is showing the best: Love and faith. Fox News’ Bret Baier’s beautiful and brave 5-year-old son Paul is undergoing his seventh angioplasty. After two open-heart surgeries.

Baier’s fellow journalists, and many other Twitter users, are harnessing the power of prayer, and are sending strength and love to Paul Baier and his loving family.

@BretBaier @childrenshealth God bless you and your brave boy.Your family is in our constant prayers.

@BretBaier @childrenshealth praying for Paul and his wonderful family this morning. Love you all! XO

@BretBaier God bless him + your family, Bret. Will be thinking of you today.

@BretBaier you and your family are in our family's prayers ! God bless your little one.

@BretBaier He has unmatched courage. My thoughts are with all of you. @childrenshealth

@BretBaier Prayers for him and your family. I can't imagine how hard this is on all of you. He's a brave little man.

@BretBaier prayers for your family today.

@BretBaier @childrenshealth our prayers are with him and your family.

@BretBaier @childrenshealth Thinking of you and your little guy and sending prayers from FOX Orlando!

ICYMI @BretBaier 's son is having heart surgery today, please pray for that precious boy and his family K?

@lidsamy @bretbaier praying for God's guidance of the doctor's hands.

@BretBaier The Lord's blessings and prayers for Paul. Prayers also to keep Mom & Dad strong at this time.

@BretBaier God tests the toughest. My family is praying for Paul.

@BretBaier // during my prayer time now, praying your precious son's heart is restored to perfect health.

@BretBaier @childrenshealth "God bless the little Children." Paul you are love to all that know you.

@BretBaier I am praying for your son today.

@BretBaier keep the faith bro. Our daughter had open heart surg 4 aortic coarctation when she was 4 y.o. She is now 18 @ healthy

Our thoughts and prayers are with brave, little Paul and with the entire Baier family. Please keep the prayers and love coming, Twitter.

Thank you for all the prayers and good thoughts- This was just before Paul went in w/ the Santa Bear my staff gave him http://t.co/PDI7bjKx 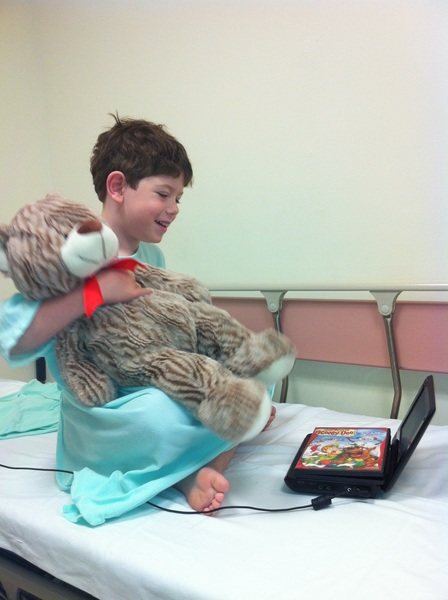 After 7 hours-Paul's procedure is done-a success-he'll wake up soon. Thank u for your the prayers. One step at a time-more hurdles to come

Wonderful news! Wishing him the speediest of recoveries.

Paul is not supposed to move his legs for 6 hrs after waking up- HE'S 5! Good thing we loaded the iPad! @childrenshealth has been great

Technology is awesome. Hugs to Paul!