ACLU: ‘Curriculum transparency’ a thinly veiled attempt to chill teachers from talking about…

Rep. Eric Swalwell shares one of the ‘eye-popping amount of DMs’ from foreigners he’s…

‘CCP thanks you for your service’: NY Times does an image makeover for China ahead of the… 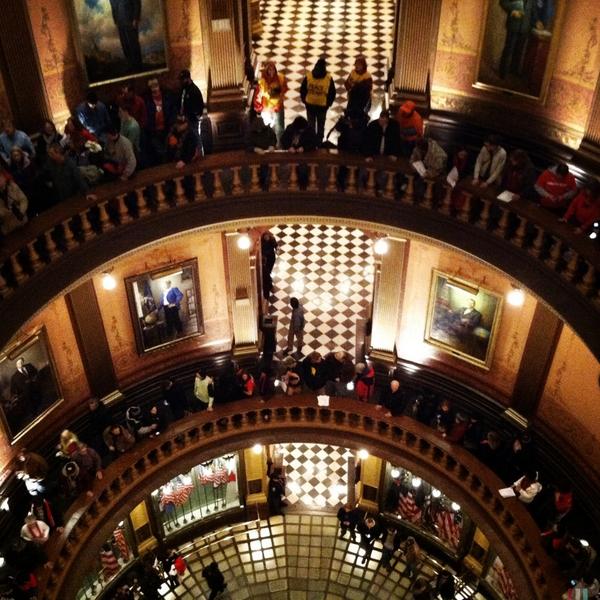 Protesters to march on Michigan capitol over "right-to-work" vote http://t.co/Ul739aya

As Twitchy reported, teachers who put their own self-interest above their students took the day off to attend the union-organized and astro-turfed right-to-work protest.

10,000 expected in Lansing, MI today to protest the Right to Work issue. Some schools will close so teachers who belong to union can go!

And, of course, Jesse Jackson is making an appearance.

The Rev. Jesse Jackson is coming to Lansing, #Michigan, today to participate in protest against #righttowork, Rainbow/PUSH coalition says.

Riot police are at the ready.

Riot Police enter the #Michigan State Capitol as thousands protest #RTW inside & outside the statehouse.#Local4 pic.twitter.com/kMAdWxw7 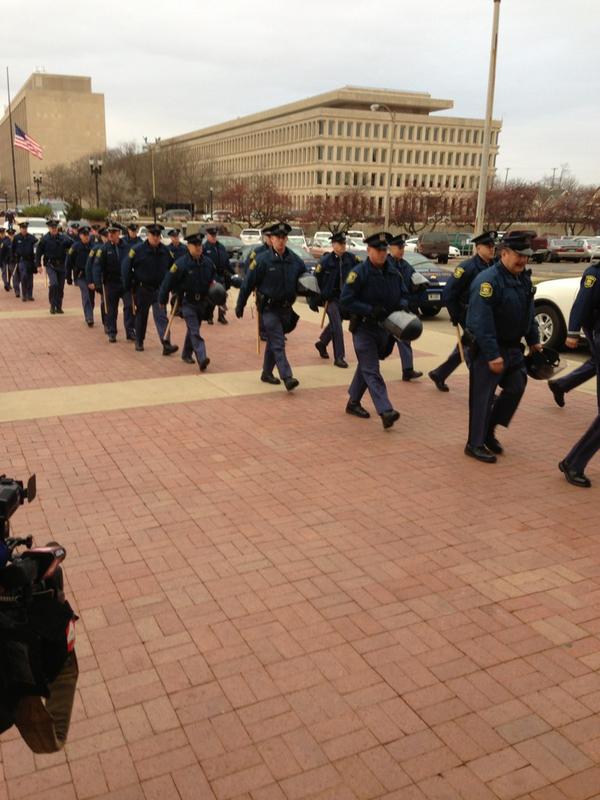 photo: Pres. Jim Hoffa leads his union brothers & sisters on the march to the Capitol pic.twitter.com/BfMr93Vh #savemi #NoRTWMI #1u @Teamsters25 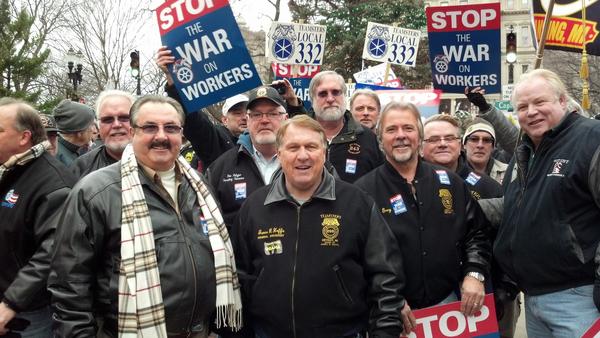 Panorama from eight floors above the #Michigan Capitol. I hung outside the window to take this from Boji Tower. pic.twitter.com/FcGNnGn0 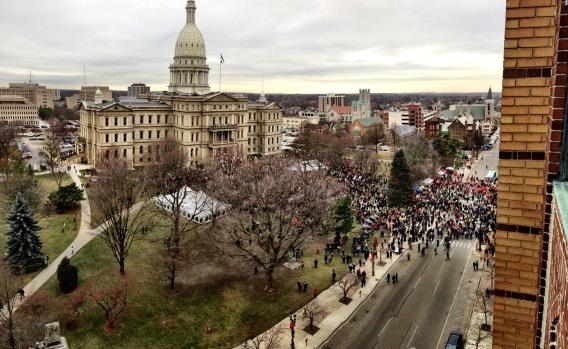 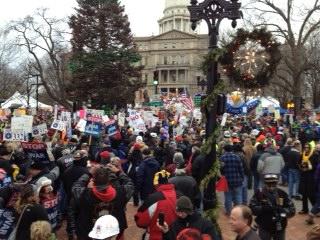 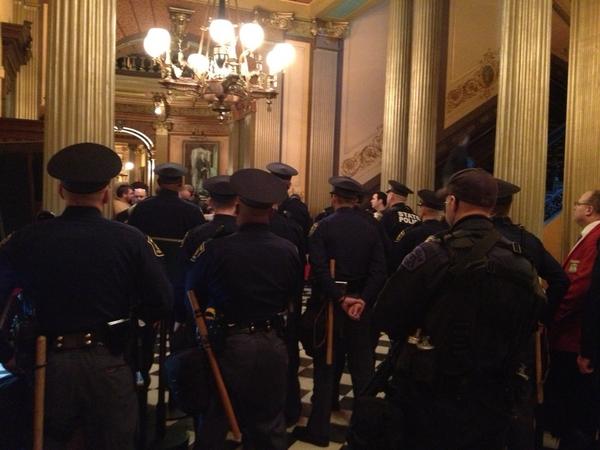 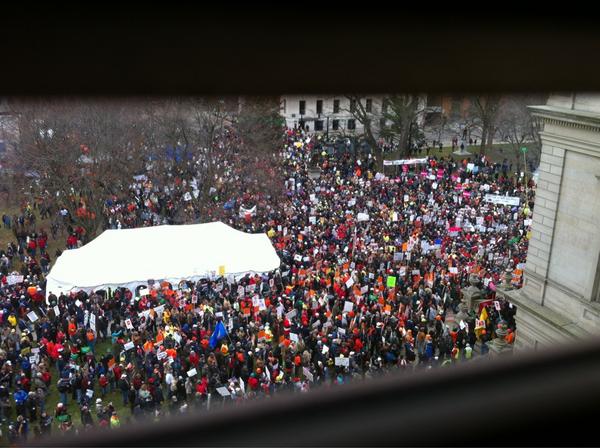 They are about to riot in Michigan over the shift to Right to Work. This isn't a joke unfortunately. We'll see how this pans out.

We hope the riots don’t come to pass. Twitchy will monitor this situation and update with further developments. The vote is expected to occur shortly. Non-goons explain why it will be great news for Michigan when it becomes a right-to-work state.

MT @B_Helderop: Why I believe #righttowork is a huge milestone for #Michigan – http://t.co/lrxCPEGg

Update: Even while protesting, they must whine about Romney.

And we are standing outside of a building named for Romney's father. Ugh. #saveMI #1u pic.twitter.com/NZj8IQXO

Update: Granholm is also there.

Standing in solidarity w/ those braving wind & cold in Lansing today protesting #RTW. Are you there? Tweet me photos #SaveMI

Update: Threats of violence from a Democrat from the House floor:

Holy shit. A Dem on the MI House floor just said "there will be blood" if right-to-work passes. Name is Douglas Geiss.

Update: Michael Moore thinks it is totally awesome that teachers blew off work, and failed to do their jobs today. For the children!

This may be the largest demonstration ever @ the State Capitol. 12,000-15K inside & out. So many teachers present, some schools had 2 close

Here is a teachable moment, dear.

@MMFlint And u c this as good thing? "So many teachers present, some schools had 2 close" They obviously care more at their benes than kids

Then again, maybe it’s better for the kids that their teachers stay away: 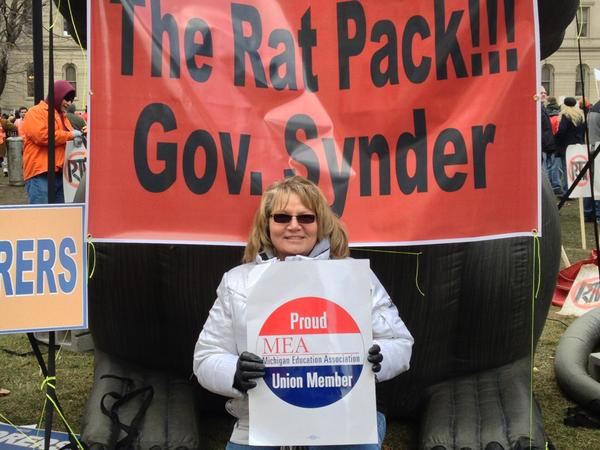 Is our children learning?

Update: Goon-ettes have somehow managed to make the right-to-work debate about a battle for lady parts:

@jakemcguire … and Sen. Whitmer just called #RTW "anti-woman"! I have something to say about that. …

Out of my union-out of my uterus. That where they're hiding Hoffa? @downtownlansing #rtw pic.twitter.com/n7XDglb2 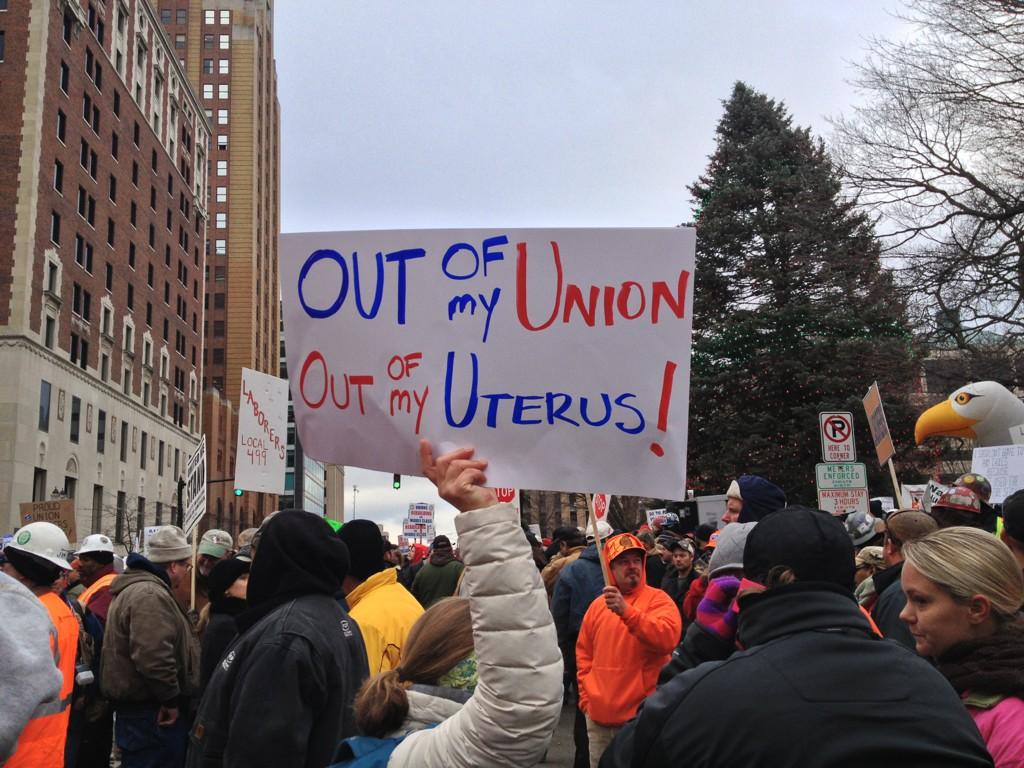 Update: Union thugs are making good on their threats of violence:

Police called for over 2 hours as women, elderly were rushed & assaulted in @AFPMichigan tent. Thugs promise they will "destroy" supporters.

And shouting down counter-protesters:

the pro RTW folks are completely surrounded by protesters, some yelling "scab"

On the spot where Americans for prosperity tent fell, a right-to-work supporter remains, surrounded by union supporters, taking verbal fire.

Update: Meanwhile, the Michigan House has passed the right-to-work bill for public employees.

The vote on the bill for private sector employees should happen shortly.

Republicans ask for a reconsideration of #righttowork, which means they'll control the debate and final vote tomorrow.

So final passage on private sector bill delayed till tomorrow. #righttowork. Bill passed 58-52 and will head to @onetoughnerd Wednesday.

The reconsideration request was made to keep Dems from doing the same thing. They can withdraw request today and bill heads to @onetoughnerd

"I have signed the freedom to work bills into law." – Gov Rick Snyder

PERIOD: DCCC insists that ‘Republicans’ have no business interfering in your private medical decisions

‘Back to hashtag diplomacy’! Antony Blinken takes a familiar approach in tweet about Ukraine and Russia