She MAD! AOC goes into frothy-mouthed rant after Laura Ingraham mocks her for wearing crazy expensive…

Ben Shapiro and Charles C.W. Cooke fire back at Jonathan Chait for smearing them as fans of…

Heh. President Obama touted The New York Times’ Paul Krugman as “one of the smartest economic reporters out there‘ not too long ago. That’s not really surprising. It’s no wonder he thinks Krugman is smart; Math is hard! Math, and reality, are also hard for Mr. Krugman.

Twitter users, unlike the president, don’t squee over the absurd Krugman. And the response to his “This Week” appearance this morning was no different.

The oh-so-classy Krugman attempted to slam Sen. DeMint by making a “joke” about DeMint’s new gig at The Heritage Foundation.

.@NYTimesKrugman: Demint's departure from Senate to Heritage is like taking Think out of Think Tank #ThisWeek

@ThisWeekABC @NYTimeskrugman Krugman has neither think nor tank.

The always ridiculous Krugman then prattled on, relentlessly letting his idiocy show. Bless his heart.

@pete_earle That's because Krugman is a propagandist, not an economist.

Dad: "Yeah, but isnt Krugman a Nobel prize winner?" Me: "Yeah. So is Obama"

#ThisWeek Krugman is an liberal idiot. Pay up rich guy. Give up 90% of your income if you feel so strongly about taxing the rich.

Mary Matalin to Paul Krugman: Are you an economist or a polemicist? #ThisWeek 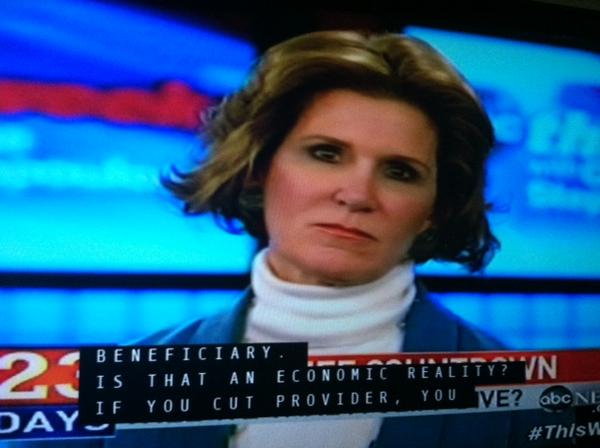 Well faced, Mary! Of course, she could have been looking aghast at his tie.

You know what's total nonsense, Krugman? Wearing a thick half Windsor with an Oxford button-down collar.

@JPFreire Woven ties should only be tied four-in-hand. Any bigger knot is an abomination against civilization and God Himself.

NBC News’ Andrea Mitchell on NBC’s silence on the Hunter Biden story: ‘We cover what is reliably truthful’