‘Not easy being this sh*tty, but Keith makes it look effortless’: Keith Olbermann uses MI…

DAFUQ?! Noah Smith’s NASTY attempt to use ‘POC getting more abortions’ to call…

ALERT: Joe Biden is at Costco.

The mocking was swift and hilarious. It’s a BFD! Literally and stuff.

You think Biden has a Costco card?

VP Biden attends grand opening of first Costco in DC. Did we miss announcement that he's running for mayor?

Needs wax and chamois for the trans-am RT @TonyTull: VP Biden makes an appearance here at the Districts first Costco.

Tim Pawlenty might be a Sam's Club Republican, but Joe Biden is apparently a Costco Democrat. #hiswordasaBiden

15 lb tub of malarkey RT @AliNBCNews: Per pool, VP Biden is stopping by opening day of a Costco in D.C. What will he buy in bulk?

It's a BFD. RT @aliciacohn: @VP Biden is attending the grand opening of D.C.'s first Costco.

"It's great to be here! I've been shopping at Target for years!" -Biden tells the crowd… RT @stefanjbecket ALERT: Joe Biden is at Costco.

#Biden is attending the grand opening of a Costco in DC. Seriously? Where's #Obama, the new Yogiberry in Reston?

VPs, they’re just like us, you guys! RT @ZekeJMiller: Pool: Biden flashed his Costco card as he walked through the doors to loud cheers.

The pool reports should be EPIC RT @jbendery: BREAKING: Joe Biden is at Costco!

Indeed! Twitchy will, of course, update with all the further hilarity!

Update: Did Joe snag himself some samples?

Did Biden eat a free sample at Costco? Looks like he could have based on this pic http://t.co/ws7gQqEB

Will Joe Biden check the Costco manager for an indian accent?

Joe Biden browsing what looks like the book table at a D.C. Costco http://t.co/KShLaRLY

Is there any chance VP Biden's trip to Costco doesn't produce a picture better than the one of him with the biker? This will be fantastic.

RT @ethanklapper: Confirmed: Biden has a Costco card! "He flashed his Costco card as he walked through the doors to loud cheers."

He got STUFF! He got STUFF!!! RT @HuffPostPol Pool: "VP Biden engaged in an extended Costco shopping spree"

"Uh, thanks, Joe, but what am I supposed to do with all these pickles?" a conversation I imagine will happen at the White House today

And, another thing to please make happen.

Update: Nothing is complete without a hashtag! Enter, #BidenAtCostco

"They gonna put you back in chains and sell you in bulk!" #bidenatCostco

So Joe Biden is just gonna go crazy in the ice cream section and eat everything right? #bidenatcostco

#BidenatCostco Telling customers that the king-sized fish sticks in frozen foods are basically "a lot of malarkey".

Check twitter this morning, only news is #BidenatCostco Gonna be a good day.

Anddd your first wire photo of Biden at Costco, via the AP's Susan Walsh pic.twitter.com/dduabr97 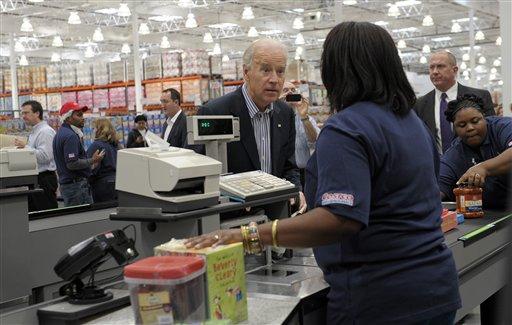 "Biden turned down the employees who were trying to lure him to the
tire department. 'Hey man I don't need tires. I don't drive anymore.'"

I have finally decided on my vote for Time's Man of the Year: The Costco employee who tried to upsell Biden some tires.

And, see! It was children’s books.

VP Biden is back at the WH w/ a haul from Costco: reporters spotted childrens' books, fire logs, a big apple pie and a 32 inch Panasonic TV

And sample noshing. We knew it!

"Biden also availed himself of several Costco food samples, and looked like he enjoyed them."

Pool: Biden put in a call to his daughter, Ashley, saying he needed to "get some guidance"

The photos are priceless. 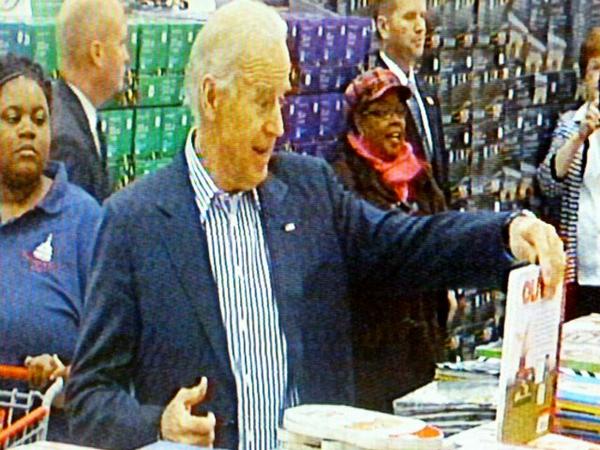 One does not just buy a pie. #soulsearching RT @jtes
Joe Biden's pie-shopping face is so wonderfully serious. pic.twitter.com/w4AcGxFw

Did Joe Biden have a case of Jack Daniels in his shopping cart? (Photo by Saul Loeb of AFP) pic.twitter.com/llbQ9kHB

RT @RichardA: Did Joe Biden have a case of Jack Daniels in his shopping cart? (Photo by Saul Loeb of AFP) pic.twitter.com/Ggx802X2

They pack other items in leftover boxes, doy. MT @RichardA Did Biden have a case of Jack Daniels in his shopping cart? pic.twitter.com/XFTN5wua

Beto O’Rourke reminds us that ‘the Constitution says’ women should ‘make their own health care decisions,’ like getting an abortion

‘Shameless’: President Biden gets in a plug for ‘Build Back Better’ during WH menorah lighting