No, really. The White House launched another pitiful hashtag campaign. The latest sad attempt is about extending the Bush tax cuts. Wait, what? We thought those were evil?

Obamairony: Same ppl who claimed "Bush Tax Cuts" were only 4 rich now argue to keep them b/c they help the poor. http://t.co/JlsFpeYT

“the Bush tax cuts—people didn't need them, and they weren't even asking for them.”–Obama 07: http://t.co/dRygaYm5

Pres Obama today launches another hashtag campaign: #My2K. It's his campaign for extending middle class tax cuts but not for top earners.

Heh. #Dontdoublemyrate was a classic hijack, filled with comedy gold! Hey, White House, what’s the definition of insanity again? And, away they go, delusionally pimping yet another hashtag.

"Call your members of Congress. Write them an email. Tweet it using the hashtag #My2K." —President Obama 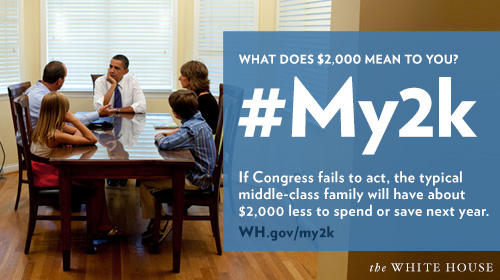 See? He’s totally sitting around your kitchen table! And he reads letters, in the form of tweets.

Pelosi gets in on the idiocy.

I join President Obama in his call on Congress to pass a middle class tax cut bill right now. #My2K

Happy warriors aren’t buying it, and the mockery begins swiftly.

Uhh…@whitehouse, isn't it misleading that you just retweeted someone who thinks #my2K is an additional $2k per month?!

And, the hilarious hijacking begins.

I'm enjoying the new #My2K cite created by the White House. It's not often the Obama White House pushes a Bush initiative.

"Use your Tumblrs and your Instadewhickeys to uh uh uh uh..tell them that I won again. uh uh Tweeter" #My2K

Shorter Obama: only 2K is yours. The rest is mine. #my2k

Dear @whitehouse: May I suggest a more accurate hashtag for your #my2k propaganda campaign? How about #SeizeMy401k? #tcot #p2

#My2k doesn't mean crap if you keep spending! Keep taxing and we all pay the price through higher prices for consumer products.

Dear #My2K liberals: For all our sakes, please consult a dictionary as to the difference between "given" and "taken away." #caring

Because what Americans need right now is to become even flinchier. #my2k

It is truly telling that the Obama administration wants to use hashtag #My2K. It's all about ME. Even though somebody else pays my salary.

Doug Benson gets in on the action.

The President of my country asked me to tweet #MY2K. Done. Now I"m asking him to stop the war on drugs. #AndWarsInGeneral @BarackObama

But not in the good way, White House.

I give it just a few minutes before the conservative Twitter community completely floods #my2k. Doesn't the administration know by now?

#Protip for the @WhiteHouse: If you're going to make the hard sell on a hashtag, buy the rights to promote it first. Idiots. #My2K

And, a three-way tie for the win.

#My2K is just a warm-up. We'll know Obama is really serious about the fiscal cliff when he creates a Pinterest board.