As Twitchy reported, Nancy Pelosi held a press conference today to deliver the oh-so-shocking news that she’s not stepping down as House minority leader. On the plus side, she committed a hilarious and epic flub: She said that Democrats “still have the gavel.” Whoops!

But, wait, there was more hilarity to be had at the press conference. Evidently, all that was missing in the lady parts peddle-fest was some Code Pink style vagina costumes. 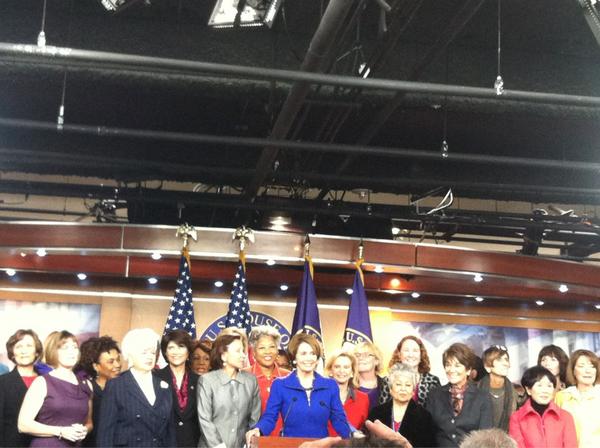 Pelosi: "The thought of four men at that table was not an appealing site…"

Men have cooties; can’t even bear the sight of them! But what about their Man-God Obama? The Patriarchy ™ is totally fine, natch, so long as he pats you on the head and pays (or makes someone else pay) for your birth control. Poor, helpless dears!

I have never seen @NancyPelosi play up the pro woman theme as she is doing now. Even joking about the scary sight of all men at the table

When you lose CNN’s Dana Bash …

@slone "We don't have the gavel. But we have something more important… unity." For a second I feared she might say "vaginas"! #Pelosi

Seriously, Nancy Pelosi is out of touch. Her interpretation of women empowerment is convoluted & sad. Don't ever pretend to speak for me.

The "future" of US women as represented by Pelosi & her new gal pals feels an awful lot like a huge step backwards.

Then the ladies started booing a male reporter. Luke Russert dared to ask a pertinent question, rather than worshipping at the altar of lady parts. Thus, he’s sexist. And agist. And whatever other “ist” they can come up with.

Luke Russert RT @charliespiering: Pelosi and women Democrats booing and mocking a male reporter. . . not sure who it is

.@LukeRussert gets groans from women on stage by asking Pelosi if her leadership means younger leadership can't move forward

Luke Russert asks if Pelosi staying on prevents younger ppl from stepping up. He gets booed by all of the women in Congress… #heyladies

RT @RealClearScottThe response to @LukeRussert's very legitimate Q to @NancyPelosi is really something to behold http://t.co/gpdtm8wH

Libs on Twitter also freaked out. How dare he treat Nancy Pelosi as he would any other politician. Doesn’t he know that “empowerment” means being treated as a delicate flower who surely can’t be held accountable for anything. She’s lucky she can hold a gavel, much less remember if she has one or not.

@LukeRussert would never ask McConnell if he's blocking younger members from moving up. Way to be offensive Luke. #Pelosi

Pelosi's body has a way of shutting down a "Legitimate" sexist question from Luke Russert, the confirmed Douche Bag.

That kid got his job due to nepotism so this is rich: "Nancy Pelosi swats down Luke Russert's offensive question! http://t.co/BYGiarb4" ”

But, wait. Don’t Progressives of Pallor always criticize the GOP for being the party of old white people? What’s good for the goose, toots.

Lament "old white men" of the GOP= Sound analysis. Ask #Pelosi if its time to move along? "Age Discrimination. @IngrahamAngle

Luke Russert took to Twitter to explain his question, which was a good one.

While Pelosi laughed off my Q as age-ist, many House Ds will privately gripe it hurts caucus that all 3 leaders are 70+.

The longer the top 3 stay, the longer it takes to infuse the caucus with new blood like #GOP did w Cantor, Ryan, McCarthy etc.

Bingo! But, you know, facts don’t matter. They have gender identity politics to wage. You’ve come a long way, baby!

A happy warrior puts the faux-outrage in a hilarious, ageism-mocking nutshell.