As Twitchy reported, the New Black Panthers are in Philadelphia, thuggishly trying to intimidate voters. There are now also reports that they are in Ohio.

Black Panthers at Cuyahoga county Ohio board of elections.. pic.twitter.com/vWoAsmeS 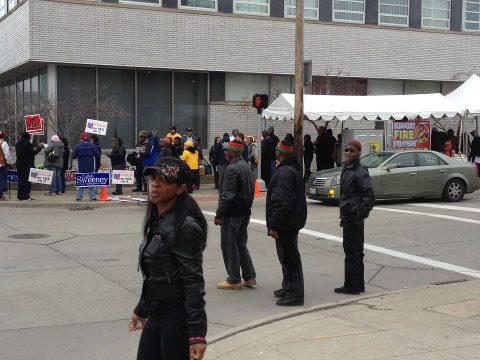 Other reports now indicate that former Navy SEALs, perhaps from True the Vote, are on their way to help guard against this voter intimidation.

Oh my. RT @ToddKincannon: Rumor is that Navy SEALs from @TrueTheVote are about to confront the Black Panthers at the Philly polling location

Fox News seems to be confirming.

Black Panther at door of Philly polling place.Ret Navy Seals say they will be there to insure voters get to vote.Rem O & Holder upheld this!

Twitchy will monitor and update as confirmation and new developments occur.

Black Panther reported at the polls in… Cleveland. Looking for pics.

More info on the SEALs and Special Ops program to counter voter intimidation:

Fox News has video on “Get out the Vet”: